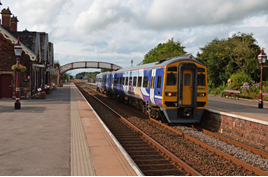 The Settle-Carlisle Line’s near 150-year-old story has always been one defined by its remarkable survival. Renowned for being one of the world’s most scenic railway journeys, it is now every bit as famous for its powers of endurance.

The S&C’s most celebrated victory came in April 1989, when Michael Portillo memorably announced its last-minute reprieve from a closure that had been eagerly sought by an ever-economising British Rail. What is less well known, perhaps, is the hard-won reputation already earned by the line for seeing off mortal threats, even before the first train steamed over the 72-mile ‘Long Drag’ in August 1875.

The irony is not lost on railway historians that almost exactly 120 years before Margaret Thatcher’s Transport Minister called a formal end to BR’s cost-cutting campaign of the 1980s, a very different government was using its parliamentary clout to bring the line into existence. Indeed, it was only at the insistence of Liberal Prime Minister William Gladstone that the line was even built in the first place.

Nervous of the colossal (and still mounting) construction costs, Parliament had to force a reluctant Midland Railway to put its hands in its pockets by refusing a petition to overturn the approval granted to build it in 1866 (thus scoring a first crucial victory for the S&C).

Back in the present, and a more elemental force now looms large over the continued operation of the line… Mother Nature.

A marvel of Victorian engineering, the line’s succession of 14 tunnels, 17 viaducts and a ruling gradient of no more than 1:100 ensured a swift journey for Anglo-Scottish traffic through northern England’s Pennine interior. But it also restricted the Midland Railway’s route surveyors and Chief Engineer John Crossley, resulting in some perplexing design conundrums in order to tame the undulating terrain and challenging geology through which the S&C had to pass.

The best example of this lies eight miles south of Carlisle, where the line continues on its long but gentle descent into the city from the 1,169ft windswept summit at Ais Gill. Here the railway runs along the top of a steep gorge in the Eden Valley, some 60 metres above the riverbed. The two tracks perch precariously on a ledge carved into the precipitous valley side, before safely burrowing back into the surrounding hillsides.

It is hardly the most structurally sound place to build a railway, but the strict parameters set for gradient and curve radiuses (plus the ever-present financial considerations) precluded tunnelling into the hillside on a different alignment, or running further down the slope nearer to the shallow but meandering valley bottom.

Until February, the name of this place at Eden Brows was almost unheard of, and understandably overshadowed on a line more treasured for majestically sweeping viaducts at Ribblehead, Smardale, Dent Head and elsewhere, as well as for its well-appointed Midland Gothic station buildings.

But swelled by a succession of fierce winter storms (named Desmond, Eva and Frank), the River Eden had spectacularly burst its banks, causing large parts of Cumbria to remain flooded throughout much of December 2015 and into the New Year. Although well below the railhead, this increased hydraulic force set about eroding the valley side with great effectiveness, thus undermining the base of the vast slope upon which the railway sits.

Gravity duly took over and triggered a slow-moving landslide, lubricated by record amounts of rainfall that continued to fall on already saturated ground. When Network Rail first closed the railway on February 4, after a twist fault was detected in the Up line nearest the cliff edge, it was estimated that 500,000 tonnes of material had moved - almost 100 times the tonnage that fell into the sea at Dawlish two years earlier. The Down line was kept open for a further five days with a 5mph speed limit, before that too was shut for safety reasons.

Geological surveys made by aerial drones and borehole testing showed an area measuring 150 metres x 70 metres to be affected. More seriously, the entire formation had slumped by 1.5 metres, and was still moving. NR said the ground would need to stabilise before it could devise a permanent fix or announce an accurate timescale for re-opening. Dawlish may have taken six weeks to repair, but this section of the network would have to be shut indefinitely.

The line was initially closed between Appleby and Carlisle. Although 22 miles south of the landslip, Appleby was deemed by operator Northern to be the best place to transfer northbound passengers onto rail replacement bus services, owing to the availability of welfare facilities, mess rooms for train crew and a crossover point. Bus services would run the remaining 30 miles calling at all intermediate stops, but would need to negotiate narrow roads in order to reach these scattered rural communities - with some considerable time penalty.

Following a sharp drop in the number of passengers, the decision was made in June to extend some services as far north as Armathwaite - they would then run wrong line back to Appleby to access the crossover to regain the Up line back to Leeds.