“I sense real change at the moment” 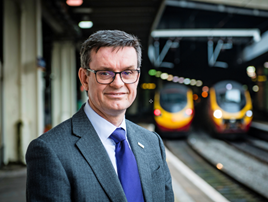 The best analogy for Network Rail’s ongoing campaign to embrace devolution did not come from the pithy pen of a journalist or industry commentator, but rather the proverbial horse’s mouth, during RAIL Managing Editor Nigel Harris’ candid interview with Mark Carne in RAIL 821.

Having been put on the spot over persistent criticism that the organisation is still too centralised, NR’s chief executive responded: “It’s like standing on a beach waiting for the tide to turn. For ages you can’t tell whether it’s going out or starting to come in - you only see gradual progress.”

It’s difficult to argue with anything contained within those two sentences, as the transfer of power to those at route level has been purposely incremental and carefully progressed, rather than a more immediate clamour at the risk of upsetting the apple cart.

You could go back as far as May 2011 and the publication of the McNulty report for the first formal nod towards decentralisation, with its conclusion that NR needed to do far more to work closely with its customers, while instilling a culture of greater cost efficiency and more competitive business practices.

Former Transport for London commissioner Sir Peter Hendy made achieving devolution his calling card upon his appointment as NR chairman in June 2015. A year later the cries became almost deafening, following a review by ex-HS1 Chief Executive Nicola Shaw into the future shape and financing of NR, that made strikingly similar recommendations to McNulty.

NR had already taken the initiative, however, with Carne strongly pushing through the devolution agenda from within, as demonstrated when NR’s Delivering for our customers plan was published in July 2016.

An update to that plan was subsequently published in February, confirming that (while perhaps long overdue) tangible progress is now being made to make NR more efficient, and adopt a stronger and more localised customer focus.

NR now proudly boasts that 99% of all infrastructure work and procurement can now be approved by its eight route MDs. Also, more than half of the performance measures it uses within its new route-based score cards have been set externally by its freight and train operator customers, and not trickled down from the centre as before.

NR also has a progressive plan to enhance its customer responsiveness, by aligning itself next to operators through the integrated operating teams that will first be introduced on the new East Midlands and South Eastern franchises when they commence next year.

NR is also embarking on a separate trial of supervisory boards on the Western route, comprising NR, train operating companies, Transport Focus and an independent chairman, which looks likely to then be rolled out right across the country.

It is easy to remain sceptical that the winds of change are now blowing freely through the behemoth of NR, especially when you consider the inherent difficulty of devolving decision-making to the routes while at the same time retaining its nationwide function as the central track authority.

But that cynicism is certainly not shared by NR’s London North Western Route Managing Director (RMD) Martin Frobisher, as demonstrated when RAIL caught up with him at Euston station to put to him questions on the level of autonomy now granted to him, on his true feelings of empowerment, and on whether his employer is merely paying lip service to a challenge that is just too hard to overcome.

“I read Nigel’s article and I was really encouraged by it,” he says.

“I sense real change at the moment, and appreciate the amount of devolution coming out to the routes. What devolution means to me is all about cutting through red tape and bureaucracy, and giving the routes the ability to do what they need to do without jumping through lots of hoops.

“Right now the routes have the financially delegated authority to deal with the vast amount of issues locally without having to seek central authority, and we’re able to just get on with things and provide a good service to our customers.

“Mark Carne’s comments really struck a chord because I see devolution happening on the ground, and I have a real sense of optimism that we have a railway that’s growing. We have the challenges of a really successful product that the public wants to buy, but an environment where authority is being delegated right out to the front line where things happen.”

So far so good, but what has visibly changed to support the new ethos and willingness to do things differently that Frobisher describes? Is he able to back up his statement with convincing evidence? He doesn’t hesitate or equivocate, but instead delivers a succinct and interesting insight into NR’s new breed of internal dynamics.

“NR’s central services team have become so much more customer-focused in the services they provide me. The obvious side of devolution is what goes on between the route and our external customers, but there’s also what goes on at the centre to consider and I feel that I am being treated more like a customer. They are adapting their services to suit me.”

He adds: “For example, all the routes previously had a flat rate we were charged for a tamping shift - you paid the same price whether it was Monday, Tuesday, Wednesday, Thursday, Friday or Saturday. It doesn’t take a genius to realise that track access is better on a Saturday, so we ended up with a situation of under-utilisation midweek and too much demand at weekends.

“I said that surely we should have a differential pricing system, so that I can get a tamping shift cheaper midweek, and pay more at weekends. NR has now done that for us, which means we get much better utilisation out of the tamping machines as a consequence.