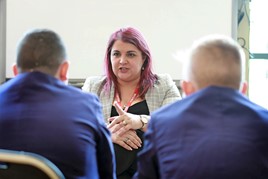 On March 25, a gathering of 4,000 schoolchildren should have been learning about careers in the railway.

A skills shortage is predicted across the industry in a number of different sectors - not just in engineering (where the focus tends to be), but in all grades: drivers, planners, fitters, ticket office staff, contract managers, catering staff… everywhere.

Yet young people do not seem to be considering rail as a career. Rail Human Library is setting out to change this.

First held on March 14 last year, at Denton Community College, Rail Human Library is the brainchild of Freightliner HR Advisor Tracey Barber, who was horrified to discover the lack of careers advice being given at schools where her daughters attended.

That first event, attended by more than 100 local pupils aged 12-13, produced feedback suggesting that two-thirds would reconsider a career in the railway. Barber had enlisted the help of assorted contacts via Twitter, and some 26 people from various sectors of the rail industry had agreed to help - including drivers, marketers, apprentices, engineers, railway chaplains and managers. RAIL was also represented.

Barber’s concept was simple: children could talk to those who work in and around the rail industry about what qualifications were needed to gain employment, what was so good about the industry, and why they love working in it.

She wanted the project to grow and soon began plotting with Lucy Prior MBE, Business Engagement Director at 3Squared Ltd (and National Rail Awards Judge). Prior’s passion for training, the future and for STEAM learning (science, technology, engineering, arts and mathematics - more commonly known as STEM, but Prior has added arts to the concept) dovetailed perfectly with Barber’s aim of attracting more young people to consider rail.

The two began working on various ideas. Prior had been unable to attend the first event due to work commitments, but explains: “We had just chatted, but I wanted to be involved.”

She had previously been involved in an event at the Magna Science Adventure Centre in Rotherham. Housed in a former steel mill, the education centre had never hosted a rail event before. Prior, who hails from nearby Mexborough, wanted to change that and spoke with members of the Rail Alliance (where she was formerly International Trade Director) asking them to attend - which they did.

“Children were all over the exhibits. I asked others to attend and Doncaster Council was also keen to support it,” she explains.

This was all very different to what had happened previously, she tells RAIL: “We didn’t have careers advice in Mexborough. There was no encouragement, you just followed your parents.”

Prior was also involved in a scheme by the Northern Rail Industry Leaders (NRIL), aimed at encouraging youngsters towards rail. “I didn’t coin the term railway family, but I wanted to showcase what that meant. It encourages everyone. It shows young people that they can be the ones to build railways or build policies.”

Barber, who lives in Denton (near Manchester) but who travels across the UK for work, became more involved with NRIL. It’s where she and Prior began collaborating, and the idea for Rail Human Library expansion came from there. And it was how, on March 25, there should have been more than 80 rail industry professionals attending the second event.

Magna Science Adventure Centre was chosen because of what it represents. Says Prior: “The historical jobs aren’t in the area anymore, so if you’re going to do something make it amazing.”

As well as the 80-plus professionals attending, eight companies had agreed to have stands at the event, including HS2 Ltd, Thales, Telent and the National College for Advanced Transport & Infrastructure.

For Barber, Rail Human Library is about more than the jobs: “It’s about breaking down stereotypes. People say the rail industry is rubbish money and rubbish hours, but it’s not. I found that mentioning the money attracted some of the youngsters. The fact is, there is a job for anyone from any background. Whoever you are, there is something for you in rail.”

Prior chips in: “People talk about professions, not sectors. They don’t see the relevant sectors.”

Barber adds: “You have to open doors and convince people to come to rail. I think, as an industry, we need to pull together and get the message out there.”

According to Prior, one of the key advantages of Rail Human Library is the chance to engage with younger children.

“It can talk earlier to children, aged 6-10. They can have their eyes opened to possibilities. I’m on a mum’s forum and talking to other mums and those with partners in the industry, they were actually very passionate and knowledgeable. That passion and interest is there - and we can trap it earlier.

“About four or five years ago, I was at a learning event and was asked how we could attract people to the industry. There were 40 people, of which one was a teacher.”

This was where the need to engage with schools in the area became so apparent to both Barber and Prior. And it worked - the March 25 event had 96 schools registered to attend.

Says Barber: “Usually, careers advice now is a teacher doing it as an extra to their day job. At Denton, the careers advisor is the maths teacher. Schools don’t know what’s out there and what’s needed, and they don’t have the time or work. It’s not their fault.”

Prior adds: “Andrew Haines says we need to put passengers first. But we need to represent the people travelling, so we need to target all backgrounds. Rail Human Library can reach out to more people.”

COVID-19 caused March’s Rail Human Library event to be cancelled, but it still took place virtually. All those who had agreed to be present made themselves available on Twitter to answer questions (and thousands were asked).

There were even some demonstration videos, including one of semaphore signalling from the roof of a London flat, while Talgo UK Managing Director Jon Veitch went live with a question and answer session.

But what of the future? Barber and Prior have big plans.

Says Prior: “Newcastle College is on board now, and the big thing for Rail Human Library is that it can be quite local. The key thing is that it must be easy to get to. We realised on Twitter that it was more adult-oriented, so we need to use Facebook to reach more children. Even now, people are still using the #RHL hashtag and the #RailHumanLibrary hashtag.

“Basically, we are bringing people to people where we can. It’s about getting that positive message across. I see LNER so often retweeting thanks from passengers after a driver has shown a young child around the cab of an Azuma - how can anyone not see the value in that? It’s exciting, it catches their imagination. That’s what Rail Human Library is about.”

I was asked by Tracey Barber if I would attend the initial 2019 event at Denton, to explain my role in reporting on the rail industry.

I’m a firm believer in getting the message out about what a fantastic industry rail is to work in, and that anyone can have a lifelong career working on our railways.

Meeting so many staff across almost 15 years on RAIL, and listening to their tales, is what makes this job so different on a daily basis. And to be able to express that to youngsters considering a career… I wasn’t going to say no.

Engaging with the children was fun. For the first session, I was paired with Hitachi Group Head of Brand Marketing Kendra Ayling. We were both able to explain how we work with the industry and the opportunities it offers, as well as what further opportunities become available as a result. Apart from one child who was determined to be a zookeeper (much to Ayling’s delight), the message seemed to get across.

It was a bit like a press conference… or speed dating. Ayling and I were sat facing the children, who had an allotted time with us before moving on to the next group of professionals. They would ask about the industry, the roles, what we liked, what we didn’t like, and why they should work in rail.

It lasted for a morning, and by the end of it I felt that we had accomplished what we’d set out to do. It’s a shame I couldn’t partake on March 25, as planned, but I’m more than willing to help in the future… and I encourage others to do so.

Report reveals around 120,000 people need to join the rail workforce to meet the expected skills demand across various roles