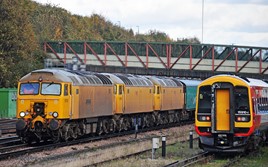 Six new weapons have been unleashed in the war against delays on the former Southern Region, with Network Rail launching six Class 57/3s capable of rescuing electric multiple units and hauling them at 100mph (RAIL 725).

The locomotives are leased by NR from rolling stock leasing company Porterbrook, having been made redundant from similar jobs on the West Coast Main Line. NR leased the six (57301/303/305/306/310/312) in 2011, and their level of work has slowly increased.

Recent brake modifications allow drivers to operate both the brakes on the ‘57s’ and those of the failed train. The safety interlocks can also be operated on the EMUs from the ‘57’, which means that the trains can be hauled at normal line speed. In some areas, that is 100mph.

The coupling modifications were carried out at Brush Loughborough, where the Class 57s were rebuilt from Class 47s in 2002-2003.

Mick Stewart, senior fleet engineer at National Delivery Service, tells RAIL that the initial drive behind the project was to have some locomotives ready for the Olympic Games. Two were completed in time, and were stabled at Stewarts Lane.

NR does not have its own drivers, and so drivers from other companies are hired to operate the locomotives. They are predominantly from GB Railfreight, although Colas Rail and Direct Rail Services also provide crews.

Stewart says it would be good if passenger operator drivers were also trained on the ‘57s’. He says this was mentioned during talks between the operators and NR, but nothing has yet materialised.

“All six Class 57s have had their couplers lowered by 115mm,” he explains. “It has to be lower to couple to the EMUs. Four are

fitted with Dellner couplers to work with the Electrostars and Desiros, while two can work with Tightlock couplers. These are the couplings fitted to the EMUs built by British Rail, and to the Class 357s used by c2c.”

It gets more complicated, Stewart explains, because five different kinds of electrical adapters are required (two for the Electrostars, for example). They are carried on the locomotives in the former boiler compartments, which remain from their days as Class 47s.

The electrical adapters are vital because they put various supplies from the ‘57’ into the EMU. “The Class 57s have air brakes, and that will translate into the unit,” explains Stewart.

Previously, if an EMU failed the option would be for another EMU to rescue it. This would block the line, and cause major delays. Rescues were easier with Tightlock-fitted EMUs, but not those with Dellner couplings - the trains would be unbraked and have to run at 5mph.

Now, the ‘57s’ can rescue an EMU and keep all its systems running, as well as clearing a blocked line.

“Before, failed units had to be rescued using whatever train was available, was powerful enough, and which could be coupled to the unit,” says Stewart.

“Route controls would have to source the rescue vehicle, and competent fitters, and get them to the depot to collect the emergency adaptor coupler before the recovery train could go out - all of which took valuable time.”

A rescue involving one of the modified ‘57s’ would involve its driver, the driver of the failed unit, plus competent staff, such as a maintenance operations manager or a train operating company fitter, on either side of the coupling. This can be achieved in 15 minutes - a huge time saving over previous procedures, says NR.

Luckily, there have been few call-outs, says Stewart. One recent activity involving the locomotives saw 57301 stabled at St Pancras International, in case any First Capital Connect Class 319s became stranded while coasting into the station during a Thameslink engineering blockade.

The project to modify redundant locomotives was first developed over the winter of 2010/2011, to help NR in its fight against poor weather conditions. NR led the project with help from Brush and Porterbrook, while the three main train operators that operate on the former SR - Southern, Southeastern and South West Trains - have all helped and shared input.

Currently the ‘57s’ are stabled at Eastleigh Works, but Stewart says NR is looking at strategic stabling points. Around a decade ago SWT used Woking to stable Class 33s and 73s that acted as ‘Thunderbirds’ for its fleet.

The ‘57s’ will be used on seasonal trains - in the autumn on railhead treatment trains (RHTT), and in the winter on snow and ice treatment trains (SITT). Stewart says using them on these trains makes it easier to deploy them on a rescue mission if required, because they will already be out and about on the network, rather than stabled somewhere.

Currently the aim is to have five ‘57s’ available at any one time - both ‘57s’ fitted with tightlock couplings and three with Dellner couplings. Stewart says that traditionally the Tightlock trains are easier to move.

In the future, Stewart would like to see the ‘57s’ hired for stock moves, with as many in use as possible. They would be hired by operators, rather than NR itself carrying out the work.

The locomotives are part of the National Delivery Service, and can also be used for various trains within NDS haulage contracts. These deals are due to be let shortly, so the ‘57s’ will be available for the winning operator - this means they could be available for yet more work, including working trains within possessions.

Stewart chuckles when RAIL asks if he would like more ‘57s’, saying: “Six is probably as much as we can get.”

NR has been hit hard by the weather on the Southern Region in recent years, and is starting to fight back. The fact that other benefits can be found, including 100mph rescue operations, is a bonus.

Class 57s were introduced in 1998 by Freightliner, as a cut-price alternative to the Class 66s.

They use reconditioned General Motors engines and Brush alternators from withdrawn Class 56s. These components are fitted to redundant Class 47s.

The project involved rolling stock leasing company Porterbrook (owner of the ‘47s’) and Brush Traction at Loughborough, which carried out the work.

Twelve locomotives were delivered to FL in 1998/1999. Despite talk of up to 30 being ordered, FL instead bought ‘66s’. FL dispensed with the fleet in 2008, and they are now split between Direct Rail Services and West Coast Railway Company.

Virgin Trains leased 12 for standby duties, and they were supplemented by a further four ordered by the Strategic Rail Authority.

VT handed six back to Porterbrook in 2011, and they moved to Network Rail. A further three moved to Direct Rail Services in 2012, followed by six later in the year. VT now has none.

First Great Western introduced four locomotives in 2004, following successful trials with 57601. They are used on Sleeper trains between London Paddington and Penzance.