FROM THE ARCHIVES: Vivarail’s dream is close to reality 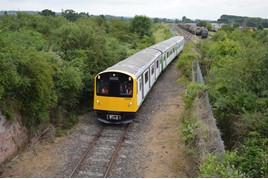 That’s because, as this issue of RAIL went to press, Vivarail’s first fully converted D-Train was due to receive its final safety certification, clearing the way for it to enter passenger service with the company’s first customer (London Midland on the Coventry-Nuneaton line) in February.

It marks the end of a long and gruelling testing and commissioning phase that began back in January 2015, following the delivery of the first batch of the 220 redundant ex-District Line vehicles acquired by Vivarail from LU.

Entry into traffic of the first D-Train (known by its TOPS classification as a Class 230) comes a full 12 months later than Vivarail’s self-imposed deadline of early 2016 that its engineers were still confident of meeting back in September 2015, when RAIL reported on progress following a visit to the company’s workshop at Long Marston (RAIL 782).

It was there that the first three-car prototype (230001) was being assembled and refurbished, comprising two driving cars and one trailer car. But it was then that the conversion project started to become unstuck and dogged by delays, as the technical complexity of building a new train from withdrawn D78 Tube stock became increasingly apparent.

Vivarail missed its timetabled testing dates on the Cotswolds line at Evesham in November 2015, as the technical team also had to contend with shifting testing criteria after several alterations were made by the Office of Rail and Road (ORR) midway through production.

The task of creating a new class of train was also (and perhaps unsurprisingly) found to be particularly demanding for a small company with barely 20 people on its books, and which has been trying to make headway in an established marketplace shared with the muscular presence of several large international competitors.

But all that can now be put behind them, says Vivarail Chairman Adrian Shooter, now that it has succeeded in turning out the finished article.

“It’s important to remember that apart from the bodyshells and the bogies, these are completely new trains,” he tells RAIL.

“We’ve had a slow start going from designing and rebuilding one train to standing on the verge of serious production of a reasonable amount of trains, as we needed all sorts of systems and processes in place.

“We’ve had absolutely no public money to develop this, so we’ve had to watch the pennies. We are also a small company and this has turned out to cost more than we thought, but at the end of the day it’s far more important that it’s right than it’s rushed.

“Several hundred standards have had to be met for ORR, and we’ve had to do exactly the same as Hitachi or Siemens would have to do when introducing a new train. But we have done, in less than two years, what much larger manufacturers often take twice as long to do.”

At the time of RAIL’s most recent visit to Vivarail on December 9, the test train 230001 was being stabled at Tyseley Locomotive Works, having arrived on November 28 for main line testing and mileage accumulation. Vivarail needed to move the prototype to this temporary home for additional testing because only a limited amount could be completed at Long Marston - line speeds on its 2½-mile home test track are limited to 45mph (15mph below the D-Train’s top speed).

On December 12 and 13 the train was run as a two-car and then a three-car unit, unloaded at first and then loaded with 15 tonnes of weights to simulate braking conditions when conveying passengers. To perform this task, 230001 was operated by West Coast Railways on Vivarail’s behalf, to and from Leamington Spa station.

Having undergone these final tests, the train was then taken to Nuneaton, where it remained for the duration of the festive period before the start of driver training with London Midland.

Provided certification is received this month (January) as expected, 230001 will be operated by London Midland from late February onwards between Nuneaton and Coventry, in a trial funded by West Midlands Combined Authority, and which includes partner organisations Coventry City Council, Warwickshire County Council and London Midland. The trial will last for eight months until October 14, when the current London Midland franchise expires.

This short commuter route was intentionally chosen to best demonstrate the Class 230s’ virtues as a high-capacity, lower-cost and more quickly-produced alternative to the procurement of new DMUs. Before its arrival, the only stock available to LM was a single-car Class 153 that was hopelessly inadequate for serving the newly opened station at Coventry (Ricoh) Arena and for coping with the events frequently hosted there.

By offering a technically superior and more comfortable alternative to existing stock, Vivarail hopes to demonstrate exactly why the ‘230’ has been mooted as the natural successor to the unpopular Pacers that have been earmarked for withdrawal by the end of the decade. The company is also out to impress the paying public and show that it can offer a more than worthy solution to the national shortage of DMUs, a shortage that is likely to be exacerbated by well-publicised delays to major electrification programmes around the UK.

The two driving cars are powered by two Ford ‘genset’ 3.2-litre, five-cylinder diesel engines that are part of the range more usually fitted to Transit vans. Although only capable of 60mph (compared with the 75mph top speed of a Pacer), the superior torque and acceleration of the stop-start technology gensets are thought to more than compensate for its lower speeds. The ‘230s’ also boast more impressive environmental credentials, in the form of lighter bodyshells made of aluminium while offering almost twice the fuel efficiency of Pacers.

The third trailer vehicle has been added to the prototype in the centre of the formation, to showcase a number of different interior layouts to potential clients - these include a universal access toilet, passenger information screens, LED lighting, USB points and different seating arrangements. It also shows that the ‘230s’ are fully compliant with disabled access rules, meaning that they can be operated beyond January 1 2020 (after which date Pacers must be either withdrawn or undergo necessary compliance modifications).

The ‘230s’ come with both in-cab driver-operated door controls and a control panel for the guard in the central coach. In the case of Driver Only Operation (DOO) being chosen, space has been left in the cab for retrofitting CCTV.

The cab itself has been completely stripped out and replaced from its former LU guise, and now resembles that of a Class 170. It is fully air-conditioned, and can easily be fitted with ETCS when this is rolled out across the network within the next few years.

Shooter adds: “Two coaches feature a range of different seating options, but the first coach still has the original LU layout. We thought that as they’ve been running crowded trains for years, the ‘crowd-busting’ layout was ideal for trying out on the Coventry-Nuneaton line that has the Ricoh Arena, and for other potential clients interested in shifting lots of people very quickly. You can fill it with less than 30 seconds dwell time.”

The retired former Chiltern Railways MD adds that despite rising development costs the D-Trains will still only cost roughly two-thirds of a new DMU, while they can be turned out fairly rapidly at the rate of approximately one a month from Vivarail’s current production facilities at Long Marston. He stresses that the company is primed for even faster turnouts, however, and is able to increase production accordingly to meet individual customer requirements.

Shooter would not be drawn on which operators had shown expressions of interest or placed firm orders, citing client confidentiality, but it is not difficult to speculate on the Class 230s’ potential applications on branch lines or on slow and congested commuter routes.

Unfortunately for Shooter, in April 2016 Vivarail missed out on orders for the current Northern franchise, after the Invitation to Tender (ITT) stipulated 120 new-build coaches were needed to replace the Pacers being withdrawn there. Six months later, when the new Anglia franchise was announced including wholesale fleet replacement with brand new rolling stock, Greater Anglia could not be tempted either.

But raising Shooter’s hopes will be several other franchises up for grabs between now and 2018, with ‘230s’ a possible answer to certain routes currently operated by East Midlands Trains, London Midland, South West Trains and Arriva Trains Wales. Great Western Railway could also be a contender, with the scale of the electrification and modernisation programme being heavily reined in on the Great Western Main Line amid rising costs, thereby threatening long-planned stock cascades.

‘Upcycling’ bodyshells originally built in 1980 will not meet everyone’s definition of a new train, but according to Shooter Vivarail is now gearing up to execute concrete orders, suggesting that rail passengers soon won’t only have to travel to Warwickshire to see the ‘230s’ in action.

He adds: “We do have firm orders, but they are subject to confidentiality clauses. But I can say that we will start manufacturing in January.

“I would hope that initially we can turn out a two- or three-car unit each month, but production can be shortened if we get large orders that allow us to achieve efficiencies and economies of scale.

“We have the four-track former MoD shed at Long Marston, and we are acquiring another shed in which we can fit another four to five cars. This is where they will be stripped out and cleaned up, and structural works done.

“So taking into account the existing shed, we have contingency plans to double production if needs be. There’s plenty of space at Long Marston and a dedicated test track.”