FROM THE ARCHIVES: Ready to charge 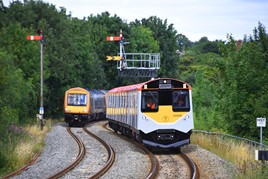 Vivarail continues to lead the way in finding solutions for the decarbonisation of the railways.

The company, which was founded on the back of plans to recycle former London Underground trains and produce high-quality, low-price trains for various routes across the United Kingdom and further afield has contracts with three train operating companies so far, each offering a different product.

The first deal, for three Class 230s for Marston Vale, was for diesel-electric multiple units, using diesel gensets. The second, which enters traffic this year, is a fleet of diesel hybrid trains for Transport for Wales, and the third will be electric trains for South Western Railway’s Isle of Wight operations.

The TfW train could provide the launchpad for a number of projects as the issue of emissions becomes a critical issue for ‘UK plc’.

Testing and training has been carried out on 230002. This is the UK’s only battery train approved for carrying passengers in traffic and has been used to develop the TfW fleet.

Alice Gillman from Vivarail explains that the train has an operational range of 40 miles on battery power alone and that this will be improved for future orders.

Vivarail will also be keeping an eye on the Traction Decarbonisation Network Strategy (TDNS) currently being prepared by Network Rail. Rail Minister Chris Heaton-Harris recently told Labour’s Luke Pollard that the TDNS will: “Indicate where routes might be electrified or where hydrogen or battery trains could be deployed. The TDNS will, therefore, inform future decisions about electrification.”

The three-car test set is fitted with two batteries in each driving motor vehicle, while it has a diesel genset in the centre car. However, during the various trials conducted at Long Marston and on the main line the centre car is not switched on, meaning the ‘230’ is running purely on battery power. This is the same formation as the TfW trains.

The TfW fleet will have their gensets ‘eco-fenced’, so they will not be running in stations or designated built-up areas; this will be the first time this method of powering a train will be used by a UK operator.

Gillman also believes these will be the last diesel-powered trains that Vivarail will build. “We eventually want the gensets gone, and we want to keep the 0% emissions going,” she adds.

Each lithium-ion battery fitted to the train is rated at 100kWh, yet they are the same size as the diesel gensets fitted to the West Midlands Railway Class 230s. This is because Vivarail’s plan is for all its trains to be of the same modular design.

Gillman confirmed there is much interest in the concept and that Vivarail has looked at many routes where a battery train could operate - including the Thurso-Wick line in the far north of Scotland. She said this, and other routes, could run the train to demonstrate how to remove diesel trains from this type of line. With the technology proven and the train approved, such a demonstration could take place in the near future.

Battery trains will be the focus for Vivarail from now on, using a variety of methods to charge the batteries. Gillman said that battery trains can take advantage of existing electrification and fill in gaps to save time and the cost of infrastructure upgrades.

“Take the Thames Valley branches, the diesel units could be removed and battery trains with Fast Charge put in instead, this would immediately remove emissions from key, busy commuter routes, similarly in Cornwall where battery trains could run the shuttle services into tourist hotspots, such as St Erth-St Ives.

“Alternatively, a 25kV/battery train could operate a line such as Glasgow-Anniesland - using the OLE to charge and for traction and then running on battery power for the remaining section.”

Prime Minister Boris Johnson’s plans to devolve power to local authorities could also be beneficial for Vivarail, as could the Government’s plans to spend £500 million exploring the possibility of reversing lines closed by the Beeching Report in the 1960s. Gillman says that the low-cost of the trains and the ability to introduce them into traffic relatively quickly is proving attractive in discussions with authorities.

They could also be used in and around bigger cities she says, and that one losing bidder for a recent franchise had included plans to use the trains around such a location. “People do need to make decisions outside franchising,” she explains regarding the infrastructure and trains needed.

The current plan is for the first production battery train to be dispatched to the United States at the end of the year where it will be used to demonstrate its capabilities to prospective customers.

Gillman says that each Vivarail battery train will be delivered with two batteries in each driving vehicle. A two-car train will have a range of 40 miles; a three-car train will have a 60-mile range. “They will be simple. In operation, a Vivarail battery train would arrive at its destination, and as soon as the driver takes the key out the train begins to charge. After ten minutes the train will be fully charged, the driver turns the train on and can then complete another 40 or 60-mile trip depending on the formation.”

Concerns over range remain for some customers, rolling stock companies and operators and Vivarail understands this, but Gillman says: “There’s a perception that the batteries will run out of power but, just like a diesel engine, you’d never use them until they’re completely drained.”

Another key area making Vivarail battery trains an exciting proposition is the expected production time. Gillman says that from receiving an order, a train will take nine to 12 months to construct. In theory, an operator that bought a fleet at the start of this year could have had them in traffic by Christmas. “We would look to sell them rather than lease them as we want to be a manufacturer,” she says.

Another key moment for Vivarail will be Brexit. The company is well-placed to export its emissions-free trains abroad, selling UK innovation around the world while creating jobs and skills here.

Gillman explains: “We have an export plan and clearly there is a market for our Fast Charge product.” New Zealand has been touted as a potential market, where the railway is interested in battery power as it considers its decarbonisation plan.

She also reveals that Vivarail can work on more than just the former D-Stock/D-Trains with which it made its name. “We can re-traction other trains just as easily.”

Vivarail is eyeing off-lease electric multiple units that could form the platform for its battery-powered trains, although Gillman is unable to say which fleets might be used.

“Our unique selling point is our Fast Charge system. It’s a really compelling offer,” she says.

Vivarail has come a long way in the past five years and with this innovative system it is poised to bring about a revolution in rail traction in the 2020s.