FROM THE ARCHIVES: Eurostar celebrates 25 years of cross-Channel operations 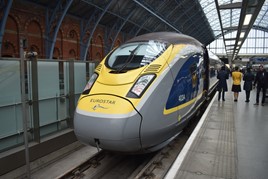 Early on November 14, the only original Class 373 Trans-Marche Eurostar train left St Pancras International for Paris Gare Du Nord. It was the first departure on a celebratory day for the company.

The set (one of those ordered by Belgian operator SNCB) still retains its original interior, first seen by cross-Channel passengers some 25 years ago.

But much else has changed in the intervening years, with the building of Britain’s first high-speed line, the changing of international terminals in the UK, the introduction of new destinations and new trains, the possibility of competition, and now the UK’s eventual departure from the European Union.

In RAIL 238 (October 1994), it was reported that European Passenger Services (EPS) planned to launch its ‘Discovery’ service on November 14 1994, which had been made possible following the awarding of the Anglo-French Intergovernmental commission licence to Eurotunnel, to allow the operation of the London-Paris/Brussels service.

That decision had been made on October 12 1994. Five days later, press conferences were held simultaneously in London, Paris and Brussels by the three companies involved in Eurostar at the time (EPS, French operator SNCF and SNCB).

In those days, Eurostar trains would serve Waterloo International (which was especially constructed on redundant railway land), with the ‘373s’ running along the third-rail system to the Tunnel, rather than on HS1 as today.

Incredibly, engineering works disrupted the trains before they even launched, when it was confirmed that initially trains would not run on Saturdays owing to work in the Tunnel. The Sunday service was limited to one train in each direction to each of the destinations, apart from Lille.

Much like today’s plan for HS2, this was only an initial service - the plan was to build up the service to hourly to Brussels and Paris. The full service was launched from May 28 1995. The following year Eurostar began serving Ashford International.

The launch did not go well, with the first train failing just two minutes before its scheduled departure from Waterloo International. Up to 30 television crews and 400 media representatives were on hand to witness the embarrassment. The problem was a software issue on set 373003, and a replacement had to be summoned from North Pole depot (which Eurostar used until 2007).

The managing director of EPS at the time was Richard Edgley. He explained on the day that a back-up set was supposed to be at Waterloo, in a copy of the inaugural trip in May 1994 when Her Majesty The Queen travelled under the Channel.

But the mood was still mostly jolly. Graham Hill, from the BBC’s World Service, said after the arrival of the launch service: “The rest of the world must have been wondering why we didn’t do this years ago. It reminds me of flying - tremendously exciting. We are an island no more.”

Over the years, more destinations were added - Lyon, Marseille and Marne-la-Vallee (near Paris, for Euro Disney), as well as winter trains to the Alps. However, the planned Regional Eurostar to Manchester Piccadilly and Edinburgh using 14-coach Class 373s never ran. High Speed Trains were used initially on these services, running from Waterloo, but low passenger numbers meant they ceased in January 1997.

The Department for Transport refused to subsidise the trains, and this - combined with the rise in low-cost airlines - led to the project being abandoned. A depot had been constructed at Longsight (Manchester) for the ‘373s’, but this is now used by CAF for TransPennine Express trains.

September 16 2003 was a big day for Eurostar, when then-Prime Minister Tony Blair officially opened Channel Tunnel Rail Link (CTRL) Section 1. This was the first part of what is now High Speed 1.

Construction had started some five years earlier, and it meant the ‘373s’ could now run at their designed 300kph (186mph) speed in the UK. Journey times were cut by 20 minutes following the introduction of the 46-mile line from Fawkham Junction to the Tunnel.

At the opening, Blair said of HS1, which had been at risk due to spiralling cost: “We don’t associate these phrases with civil engineering or railway projects in this country. This project gives optimism as to what we can do in the future.”

Fast forward four years, and the rest of HS1 opened. Overnight on November 13/14 2007, operations transferred from Waterloo to St Pancras International, which had been rebuilt in an £800 million project, while maintenance transferred from North Pole to a new depot at Temple Mills.

The next major change was unveiled in October 2010, when Eurostar unveiled its plans for what became the e320, built by Siemens (RAIL 655).

An initial order was placed for ten trains (two pairs per train), with delivery planned for 2014. At the same time, it was confirmed that the Class 373s would be refurbished, with the rest scrapped.

Then-Eurostar Chief Executive Nicolas Petrovic said: “This is the opening of a new chapter. It is a new era for rail. By 2014 we will have the best fleet of high-speed trains in Europe.”

At the launch event on October 7 2010, Secretary of State for Transport Philip Hammond said he hoped Eurostar would run from other UK cities, but this has not materialised.

Immediately after the announcement of the e320s, the French government raised concerns over safety, due to the train’s distributed power. This was eventually resolved, and the first e320s (classified Class 374s) were delivered for testing in 2013.

The first moved to the UK the following year and was unveiled to the press in November 2014, at which time it was confirmed that a further seven trains had been ordered. They entered passenger traffic from November 2015, and are used on the London-Paris/Brussels/Amsterdam routes. They offer a 20% increase in capacity against the ‘373s’.

On April 4 2018, the first commercial trains began running between London and Amsterdam. Current Eurostar Chief Executive Mike Cooper said: “The departure of our first commercial service to Amsterdam represents a historic milestone for Eurostar and the growth of international high-speed rail.”

On the 25th anniversary of Eurostar on November 14 2019, Cooper was open and honest in his views on the business. Speaking at a celebratory event at Paris Gare du Nord, he explains: “We thought about the 25 years. Do we mark what’s gone on, or do we mark the future? We transformed travel and, looking forward, high-speed rail offers a viable alternative to flying.”

Cooper says the business could yet offer more trains between London and Paris, and that it is also looking at using the existing fleet and how that can be improved.

“It’s one hour and 20 minutes to turn a train around here in Paris, and 70 minutes in London. If we can speed that up, we get more utilisation.

“Passenger reaction has been that they like the e320s and Siemens are pretty good, too, but the reliability is not where it needs to be.”

Cooper also says he expects to see competition on the route. Deutsche Bahn had been keen to run on HS1, and even brought an ICE3 set to St Pancras, but no progress has been made with this. “The industry changes,” says Cooper. “Five or six years ago is very different to now.”

He also spoke about Stratford International, which is currently only served by the Javelin service on HS1. Other than a two-week period during the Olympic Games in 2012, the station has never been served by Eurostar. Could that change, due to the growth of the north London location and its transport links to the City?

The cross-Channel operator has been through plenty of changes. And the uncertainty surrounding Brexit, along with the planned merger with Thalys as part of the Green Speed Project, means there are plenty of interesting times ahead for a revolutionary service.

At the time of the launch, Standard Class tickets had to be booked two weeks in advance. The cheapest was the Discovery Special, which cost £47.50 single to Paris/Brussels or £95 return. To Lille it was £40 single, £80 return.

The Discovery Gold, which were First Class tickets allowing a change along with an at-seat meal, was £97.50 single or £195 return; and £83 to Lille, £166 return. All tickets are priced from London.

Today, tickets can be booked up to the day in advance, and Eurostar regularly offers prices as low as £29 each way to the capital cities, although these tend to sell quickly and do have restrictions.

Eurostar/Thalys merger on the agenda for 2021

The planned merger of Eurostar and Thalys should take place in 2021, if plans are agreed by shareholders.

Announced in late September, the Green Speed project would combine the resources of the two companies that serve Belgium, France, Germany, Netherlands and the UK (RAIL 889). Together they run 112 trains daily and carry more than 18.5 million passengers per year. That could rise to 30 million under the merger plans.

Eurostar Chief Executive Mike Cooper attended a meeting in Paris on November 15 to study the projected offer should the two operators join forces, and what the combined network could look like.

“There are hidden benefits in joining with Thalys, while there are rolling stock synergies in terms of can we use the e320s on their network. We need to assess the market,” he said.

Cooper said more details would be announced in March or April next year, once further research and investigations had been carried out.

Asked if there was a concern from the European Commission regarding competition, he said: “The EC is concerned about brands battling - that’s not us. We overlap on two trains per day between Amsterdam and Brussels.”

Cooper also spoke about the ongoing saga surrounding Brexit. He explained: “We worked really hard up to March 31 with French, UK and Belgian governments as well as the EU. We set up Eurostar France so that come what may, our certifications are all French.

“We found in the end that Government officials are engaged. Nobody wanted us to come grinding to a halt at the mouth of the Channel Tunnel. My concern is the uncertainty around a Hard Brexit.”

Nor will Brexit prevent the company growing, with Cooper explaining: “We shouldn’t have problems. Any new destinations would need a bilateral agreement like now.”

However, he also said that the calling of the snap General Election on December 12 has hindered the process regarding the introduction of direct trains from Amsterdam-London.

Currently, UK passengers can travel from St Pancras directly to Amsterdam, but the return journey involves a break at Brussels with a need to pass through customs. This was due to have been rectified by the UK and Dutch authorities by the end of the year.

However, Cooper said: “It’s all agreed in principle, but because of Purdah, it’s been put on hold. I would be disappointed if it’s not launched in 2020. The Brussels change is a problem, so we haven’t launched the brand in Holland.”

Cooper had also been speaking in Paris at an event on November 14 to mark the 25th anniversary of the cross-Channel operator.