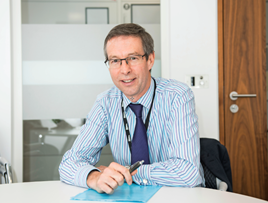 In December 2016, Secretary of State for Transport Chris Grayling announced the creation of a new shadow company that will eventually design, build and then operate the proposed East West line between Oxford and East Anglia (RAIL 815).

East West Rail (EWR) has a dual purpose: to accelerate reinstatement of the former Varsity Line that was closed in the 1960s, and to shift control of its delivery and operation away from the clutches of Network Rail.

Chosen to lead the organisation is career railwayman and former Chiltern Railways MD Rob Brighouse. He has been charged by Grayling to conduct a three month-long scoping exercise, and is due to report by the end of this month.

Brighouse has been asked to draw conclusions on how the pace of construction can be quickened, how costs can be reduced, and (most importantly) how much of the estimated £1 billion-plus price tag can be met through private finance.

He will also outline how the route might be operated in future by EWR as a single vertically integrated organisation, making it responsible for both track and trains.

This is a significant structural change in how Britain’s railways are run. It marks the end of Network Rail’s current monopoly as the UK’s only track authority, and places EWR firmly outside the England and Wales franchising system.

Grayling says he wants to do this not as a threat to NR or to divest it of power, but in order to bring about more quickly the recommendations made by the McNulty Report in 2011 and then the Shaw Report in 2016. Both reports strongly advocated greater devolution, cost control and the introduction of private capital as the best ways to improve the running of NR, making it far more financially disciplined and responsive to its customers.

Some progress has already been made in these areas. NR’s Route MDs have been granted extra autonomy, and the organisation is increasingly embedding itself within alliances alongside key contractors to more effectively deliver individual enhancements - for example, the Wessex improvement programme.

Integrated operating teams are also due to be introduced to the new East Midlands and Southeastern franchises when they commence next year, in order to generate greater alignment between track and train operations and thus incentivise all parties to more frequently put passengers first in decision making.

But it is intended that by going a step further, by creating EWR to lead the construction and operation of East West entirely independent of NR influence, a powerful benchmark can be established for the organisation to learn from.

The underpinning theory is that only by removing NR from the delivery of infrastructure altogether, can a credible and privately-delivered comparison be created to demonstrate how long a project of this size should take to deliver, and how much it should cost. Only once a separate company has been given a turn can NR then properly examine its own costs and more accurately evaluate its own internal processes, before any drastic reforms can be contemplated.

Brighouse is in an excellent position to now press ahead with filling in the finer details on how EWR will develop into a fully-fledged company, having already been a major player in one of NR’s most successful past forays into the world of private capital and efficient infrastructure delivery.

The Evergreen projects to upgrade the Chiltern Main Line were completed by Chiltern Railways and Network Rail in three stages between 1998 and 2016. Brighouse led both Evergreen 1 and 2 on time and on budget as Projects Director for the operator, which included new platforms being constructed at Marylebone and a new depot at Wembley.

He left Chiltern Railways to become deputy MD at London Overground in 2007, before returning four years later to oversee the completion of Evergreen 3. This in turn enabled a new service to begin fully running between Marylebone and Oxford from December 2016.

Opening up this route required the construction of a new chord connecting the Chiltern Main Line with the Oxford-Bletchley line near Bicester, and the upgrade of the latter from Bicester to Oxford. This will eventually share its alignment with the westernmost section of East West, and is also known as East West Western Section Phase 1.

The total cost of these works was £320 million. Chiltern Railways contributed £130m, giving Brighouse a useful perspective on private finance in rail from the investors’ point of view, as well as a head start on understanding the East West project.

Brighouse left Chiltern for the final time in December 2015 to take up a non-executive directorship at Network Rail, which he will retain alongside his chairmanship of EWR.

He tells RAIL: “Evergreen 1 and 2 was helpful for NR because it was benchmarking the private sector doing some of it versus NR going it alone, so that was good experience for me delivering that. Then I left Chiltern and worked on London Overground, before coming back when we were building the line to Oxford. Again that was very different because we did it in partnership with NR.

“I’ve worked overseas for a time as well, including in Hong Kong on what is now the MTR. So I’ve seen railway projects from a number of different angles, and obviously that helps inform the work I’m doing at the moment.

“This role absolutely fits in with what I’ve done throughout my career. I’ve worked for British Rail, I’ve worked in Australia, I’ve come back to Britain and worked in the private sector, and done some work for NR on the board, so it gives me a real opportunity to bring all that experience together.

“When you produce a benchmark, which is what I hope we’ll do, you produce it for a reason which is to say ‘there are better and more effective ways to do things’. Sir Peter Hendy and Mark Carne are really keen to establish that benchmark and see what NR can learn from it.”

Brighouse argues that chairing EWR while also holding a board position at NR will greatly benefit the process, rather than represent any conflict of interest. He feels no sense of divided loyalties by leading a project that will almost certainly expose faults within NR’s current functioning.

“To be clear, I’m doing this as Rob Brighouse running a project, I’m not doing this as an NR employee. I don’t see any inconsistency between the two because I know what’s going on within the company and beyond the company.

“My knowledge and connections to NR help me to do this piece of work - but I don’t report to Sir Peter Hendy or Mark Carne, I report to the SoS. I have absolutely 100% support from Peter Hendy and Mark Carne for what we’re doing, and I have carte blanche to challenge what NR is doing and to draw good comparatives.”