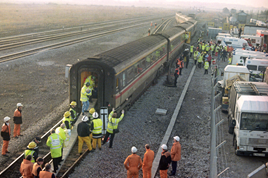 The Severn Tunnel is a Victorian engineering marvel. And until the arrival of High Speed 1 in 2007, it was comfortably the longest main line railway tunnel in Britain.

At almost 4½ miles long, its 76 million brick-lined bore has kept out the waters of the mighty Severn estuary for 130 years, while providing a crucial subterranean link for the intensive passenger and freight flows between England and South Wales.

Equally well documented is the continuous battle against the water below, ever since the infamous freshwater source known as The Great Spring was unwittingly discovered by Navvies near the Welsh side in 1879.

Catastrophic flooding inundated the works, delaying completion until 1886 (14 years after the first spades had been put in the ground). A steam-powered pumping system and an elaborate maze of drains had to be put in place - at great time and expense - to hold the tidal water at bay.

Electric pumps were eventually installed in the 1960s, at Sudbrook on the Welsh side of the river. These continue to extract 10-20 million gallons of water daily to prevent flooding, while a continuous culvert runs between the tracks to collect groundwater and take it to the pumps.

Such damp conditions not only presented a major headache for the Great Western Railway’s engineers and principal contractor Thomas A. Walker during the tunnel’s construction, they have persisted into the 21st century, as Network Rail now prepares to electrify this section of the line as part of the ongoing Great Western Route Modernisation.

Although there is a great deal of clearance underground for overhead wires, new hybrid Intercity Express Programme (IEP) trains will instead be powered via a rigid overhead conductor system (ROCS), which is conditioned to fare far better in the tunnel’s corrosive environment and which requires less maintenance than conventional catenary in this confined space.

A six-week blockade was completed towards the end of October, to allow 250 NR contractors to install more than eight miles of ROCS (RAIL 809) prior to the route between Paddington and Cardiff being energised in 2019.

The damp atmosphere of the tunnel is equally unforgiving to steel rails - diesel fumes from passing trains combine with water to eat away at the track, necessitating its replacement every six years.

Electronic equipment does not fare much better - the moisture and humidity makes track circuits so prone to failure that in 1987 British Rail was forced to install axle counters instead, in order to mitigate increasingly frequent signalling failures and serious disruption to services.

It was this decision by BR that provided the backdrop to the events of December 7 1991, when a collision between two trains resulted in the most serious incident to ever occur within the tunnel, leaving 185 people injured.

Under normal circumstances, the tunnel was operated as one long signalling block, with the number of axles recorded as a train entered and then left the tunnel. ‘Line clear’ could only be indicated for another train to enter the tunnel if both counts were the same.

An equipment failure two days earlier meant that on December 7 trains were being worked through the tunnel under emergency procedures, using handsignalmen located at the signals at both portals to enable the trains to Pass the Signals at Danger, and to proceed at caution under the authority of the signalman located at Newport signal box on the Welsh side.

That morning, Driver David Robertson approached the signal guarding the east portal at danger and brought his train - the 0830 Paddington-Cardiff formed of an HST - to a stand. With no handsignalman present, he waited for about a minute before putting on his yellow vest and walking over to the signal in order to speak to the signalman.

The signalman told him there had been some technical problems, and instructed him to pass the signal at danger but obey all others. Robertson got back in his cab, gave a long blast of the horn, and entered the tunnel.

The time was approximately 1034 when, having descended the 1-in-100 gradient at a speed of 20mph from the English side for a distance of three miles, Robertson rounded the tunnel’s slight left-hand curve and prepared to apply power for the rising 1-in 90-gradient that made up the last mile to the west portal.

But before he could pull the power controller any further back he felt a sudden impact followed by an automatic application of the brakes, quickly bringing his train to a halt. Naturally his first thought was not that another train could be behind him in the same section, and given the ease with which he would have been able to see any obstruction that emerged in front of him while travelling at relatively slow speed, he suspected the HST had derailed.

Stepping down from the cab, his first action was to snap the breakable ‘tell-tale’ emergency wire that ran along the Down sidewall of the tunnel, triggering an audible and visual warning in Newport signal box.

One hundred yards in front of him was a telephone, enabling Robertson to report the impact to the signalman and to tell him that he was going back to inspect his train. Halfway down the length of the train he met the HST’s conductor, who told him that the rear power car was now standing 20 to 30 feet from the rest of the train, although neither it nor the train had derailed.

Slippery rails, resulting from autumn leaves on the line, has been identified as a cause of the collision between two trains near Salisbury last October

Crash investigators say slippery rails were a cause of the collision involving two trains at the entrance to Fisherton Tunnel in Salisbury.