FROM THE ARCHIVES: All-change in Wales… 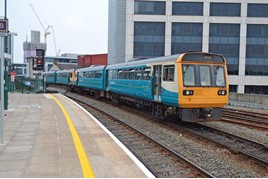 Wales has had something of a raw deal in its franchise awards.

As KeolisAmey Mobilisation Director Colin Lea points out, the current Arriva-owned franchise was designed as a zero-growth deal. The only ‘new’ trains were 27 Class 175s transferred from First North Western as a result of a Strategic Rail Authority decision in 2003.

Even then, some were sub-leased to TransPennine Express until TPE’s Class 185s were delivered in 2006. FNW, at the time of the order, operated the North Wales route from Manchester to Holyhead, which transferred to Arriva Trains Wales during a re-mapping of the franchises.

Meanwhile, on the Valleys routes, Pacers and cascaded Sprinters are relied upon to deliver thousands of people into Cardiff.

ATW has had to rely on what it was given, which is what makes the new Transport for Wales (TfW) deal so different.

For example, discontinuous electrification is mentioned. This saves money in terms of what is needed to erect overhead line electrification. In TfW’s plans, 55 bridges that would otherwise have required rebuilding can now remain untouched, while electric trains can operate in areas of significant beauty without the need to put up unsightly catenary masts.

“The Metro is transformational. And every train will be replaced, while 95% of journeys will be on new trains,” enthuses Lea.
But why order so many new trains?

“The fleet now is poor. The Pacers are hated. The First Minister called them ‘the dreaded Pacers’. They are a bus on wheels - they were a stopgap in the 1980s.”
TfW will instigate a small cascade of trains from other routes to enable Pacers to be withdrawn by the end of next year. Five Class 153s will move from Great Western Railway, while five ‘769’ Flex bi-mode units ordered by the Welsh Assembly Government (WAG) last year are likely to be boosted by a further four trains working the Barry and Penarth route. The ‘153s’ are required because they meet disability regulations, whereas the current ATW fleet does not.

Says Lea: “We need an extra float of trains so the ‘150s’ can move south to release the Pacers. The Conwy Valley will have ‘230s’ initially, before they move to Wrexham-Bidston. They will have air-conditioning, USB sockets, bike spaces, and on the Conwy Valley they will have a trolley. They are completely rebuilt - only the bodyshell is original.”

Twelve Mk 4s will be introduced to replace the current ATW Mk 3 fleet. Lea tells RAIL: “We need the PRM modifications. The Mk 4s are loved - some of the best coaches out there.”
Service provision will also change, and not just across the Valleys, where up to 18 trains per hour will serve Cardiff Queen Street.

Lea explains: “Fifteen years ago, Sundays were very different on Wales’ railways. That needs to change as people’s lifestyles have changed. With the new trains, there will be a 40% increase in services on a Sunday.”

Understandably, the headline is the changes to the Valley services. They will be operated in a different way to the rest of the Wales & Borders franchise, with four lines transferring from Network Rail to TfW next year (Aberdare, Merthyr, Rhymney and Treherbet). Thirty-six Stadler CityLink tram-trains have been ordered, and these will run onto a new route serving a growing part of the capital.

With 18 trains per hour, could it be said that Cardiff Queen Street is the hub of the project?

“The hub for this depends on the users,” says Lea. “Cardiff Central is an interchange with the likes of Great Western Railway, which is important, and the city centre is changing.

“Queen Street is close to the shops, but then there is the Bay, which is fundamentally different - it is vibrant, and that’s why we need to develop that. Loudon is about access to that area and currently rail is a barrier. Subject to funding, we could add more to the Metro plans.”

Funding for the plans, which will cost £738 million, comes from WAG, UK Government and European Regional Development Funding, although the latter is dependent upon certain journey time improvements. Funding for new trains is currently being negotiated.

“Procurement is not all about price, it’s also about quality,” says Lea, adding that this quality aspect is driven by the Welsh Government: “We had to show quality through the fleet improvement within the costings allowed.”
However, Lea is keen to stress that TfW is not just about the capital and the routes serving it.

“I think there’s a big political issue about everything centred on Cardiff. There is a lot of money being spent elsewhere. This is a big country, and we are spending across it. On its own, perhaps certain areas would have been tricky, but we felt as a whole package it was worth it.”

As well as the metro vehicles, TfW has ordered Stadler FLIRTs and CAF Civity trains. The Stadler trains will be a mix of bi-mode and tri-mode trains, while the Civitys will be diesel multiple units.

The Stadlers will be built straight after the current deal for Greater Anglia is completed next year (RAIL 853), while the 77 Civitys, which will be assembled at CAF’s Celtic Park factory near Newport, will be delivered in 2021 with more to follow in 2024.

“We chose FLIRT as that is a proven design across Europe,” says Lea, adding that the tri-mode trains will run mostly on overhead or battery. South of Cardiff Central they will use diesel. The deal for the TMUs is for seven three-car and 17 four-car trains, and Lea reveals there is an option for them all to be four-car trains if needed.

The DEMU fleet is similar to the Greater Anglia fleet, and it is possible these could be bi-modes in the future, as Lea hopes that electrification could be an option. “Possibly hydrogen, too - it will come, but it’s very, very hard to see it at the moment,” he says.

Lea says Stadler believes that these deals will be a game-changer for electrification: “It means electric trains can go through problem areas with batteries now. In very sensitive areas, it could avoid the need for masts.

“CAF was the clear winner for DMUs. It is similar to the Northern and West Midlands Trains design, and the engines are Stage 5 emission-compliant.”

But why order diesel multiple units, when Rail Minister Jo Johnson said back in February that diesel engines were to be banned by 2040 (RAIL 847)?

“Because currently there is not one mile of electrification in Wales. There’s lots of plans for the North Wales Line, but it cannot be right to continue using old trains. Batteries are a possibility, and there are plans for that if required.

“Manchester-Cardiff will be first for the Civitys to replace the ‘175s’. The rest will go to North Wales, although the Conwy Valley gets them before that.”

TfW does not expect to make major changes straightaway.

“October 14 on the Welsh railway will look a lot like October 13,” says Lea.

“The biggest point is all this is coming, but it will take three to five years. This isn’t too ambitious. The important thing is that the metro asset-transfers, and so gives us vertical integration, and we are not necessarily reliant on third parties.

“I believe one of the main reasons we were successful is that we are partners who have worked together before - it is not a marriage of convenience. Yes, it will be difficult at times, but this is about growing the railway.”

The four Valley routes transferring from Network Rail to Transport for Wales are Aberdare, Rhymney, Treherbet and Merthyr. The boundary will be just past Cardiff Queen Street.

Some 106 miles of electrification is required to support the plans, and the transfer will happen via a Transport & Works Act Order. That will be applied for soon, and then KeolisAmey will lease it from the Welsh Government. It is planned that this will be from September 2019.

Up to 15% of the work can be self-delivered, and this will be done by Amey. In the meantime, work continues on the final designs.

KeolisAmey Mobilisation Director Colin Lea tells RAIL: “We have been clever in terms of spending - we kept high-floor trams like in Manchester, which means no work on platforms. That is experience gained from Manchester and Europe. We won’t need to do Cardiff resignalling as a result of this.”
The 36 three-car tram-trains are of the Stadler Citylink design that is used across Europe, with Chemnitz in Germany probably the most high-profile. The Class 399s in Sheffield are a variant, but the Welsh tram-trains will have a standard wheel profile, even on on-road sections. That is cheaper, explains Lea. TfW is also keeping them as 25kV - there is no split voltage.

In the more open sections, the trains will run on batteries. The tri-mode Stadler trains can run for 40 miles, but the tram-train is about balancing the weight and power. As they don’t need to travel significant distances, so their range is four miles.

Plug-in points will be fitted for the batteries to ensure the trains can ‘get home’. Trackside beacons will control where the power is switched on, and there will be no need for trains to stop.

The mid-floor height on the trains helps not only Persons of Reduced Mobility, but also those with bikes, bags and sticks. They have a retractable step that works at every station stop.

Lea explains: “We noticed how ‘peaky’ Cardiff is. Outside of that it quickly falls to off-peak levels, but that 1700-1800 period is super busy. That is a challenge, and one we will hopefully change through the light rail model. The specification was that nobody can stand more than 20 minutes.”