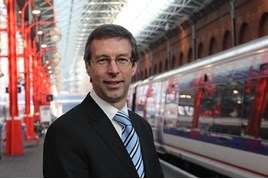 Rob Brighouse’s successful experience in running one of Britain’s best performing train operating companies was recognised earlier this year when he was appointed to the board of Network Rail.

The former Chiltern Railways MD took up his new role at NR in January, where is a member of the committees for audit and risk; safety, health and the environment; and treasury.

Having worked in the railway industry for over 40 years, Brighouse first rose to prominence after joining Chiltern Railways as Projects Director in 2000, and it was in this role that he led the Evergreen 1 and 2 infrastructure projects and the construction of Chiltern’s new Wembley depot.

These ambitious packages of works, as promised under the terms of Chiltern’s unprecedented 20-year franchise, enabled the redoubling of parts of the Chiltern Main Line, substantial increases to line speeds and the construction of two extra platforms at Marylebone to increase capacity and reduce journey times in some cases by almost 25%.

Then in 2007 Brighouse led the successful joint venture bid between Chiltern’s owning group Arriva UK and MTRC to run the London Overground franchise, and subsequently moved over to become deputy MD.

He returned triumphantly for a second spell at Chiltern in 2011 only this time to be handed the top job as MD. Continuing very much where he had left off four years earlier, Brighouse was charged with overseeing the completion of the £130m Evergreen 3 project to speed up services between the West Midlands and London, and construct the first new rail link between London and a major city in over 100 years.

The route between London Marylebone and Oxford Parkway opened last October, with services due to be extended to Oxford railway station in December.

Under Brighouse’s leadership, the TOC was also regularly ranked top for customer satisfaction among franchised operators in the National Rail Passenger Survey, compiled by Transport Focus, demonstrating his firm commitment to looking after the needs of existing customers in addition to winning new business.

Brighouse is a fellow of the Institution of Civil Engineers and also holds an MBA from Aston Business School.