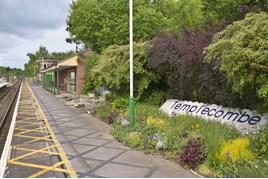 Templecombe station, on the London Waterloo-Exeter line, embodies what the can be achieved through a successful partnership between the railway and the local community.

There has been a determined attitude, combined with a creative desire, to improve the station. The village’s desire has been to hold onto history while at the same time recognising the involvement of Network Rail and the operator South West Trains.

Closed in 1966, the station re-opened in 1983 after much pressure from the Templecombe Station Working Committee. Since then there has been a new waiting room opened as well as gardens and the installation of a second-hand footbridge.

Six years ago a new group of volunteers, the Friends of Templecombe Station (FoTS) was formed to take on the responsibility, mainly, of the gardens. But they also gave added value to the whole station and helped SWT to promote the line. The National Rail Awards Judges have dubbed the FoTS the station’s secret.

FoTS members regularly attend the station, and have become an active voice for passengers with queries, complaints and compliments being passed onto the station manager or health and safety Officer.

Expansion came five years who when NR built a new platform for the Access for All programme once the signal box had been closed as part of the route modernisation programme.

Following discussions regarding the footbridge, it was agreed that FoTS would support the railway by caring for the gardens, a redundant waiting room, shelter and the signal box too.

The volunteers raised money to buy timber and paint to renovate the buildings and it was agreed these could be repainted into historic Southern Railway colours of green and bamboo. SWT has since reimbursed the FoTS for the cost of the paint and plants to show the strength of the partnership.

At the start of 2016, a major breakthrough involved the tri-partite agreement for the railway to supply a supervisor, some scaffolding and a cherrypicker, plus paint, to support FoTS plans to repaint the footbridge that become an eyesore, creating a poor visual impression of the station, railway and village.

Volunteers began work in February this year, and again agreement was reached for the former SR colours to be applied. Apart from the safety-critical part of the structure over the running lines, the bridge was repainted by volunteers, who then also painted the bollards and light columns in the car park.

SWT’s staff member in the ticket office is also appreciated by passengers for her advice and support. She provides magazines for passengers, helps tend to plants donated by the station manager and is a goldmine of local and knowledge both for the area and the railway.

Local business has also got involved through publicity and sponsorship of printing station calendars that have proven a lucrative fund-raising source. Others have funded plants and manufacturing cushions for the waiting room.

All this has created a modern station building built by NR that is supported by improved gardens and a renovated footbridge. Maintenance is shared by the FoTS and railway staff.

“The judges found Templecombe a delight to visit, with the best community garden display of all the stations visited.

“The station’s secret is a remarkably active Friends of Templecombe Station group which has gone beyond gardening to work with local staff to improve the overall station environment. They campaigned successfully to get the footbridge painted and have helped to preserve the listed signalbox and a waiting room for a display on the station’s history.”