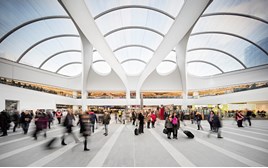 This major station project, costing approximately £750m, was frequently called Europe’s largest refurbishment project, prior to its official opening by Her Majesty the Queen in November 2015.

In addition to acting as a catalyst for urban regeneration, it was designed to deliver a 50% increase in passenger numbers thanks to a larger number of vertical routes between the platforms and concourse level and a new spacious concourse five times the size of London Euston.

The sustainability aim of the project was to secure a BREEAM ‘Very Good’ rating, which was achieved by installing a low carbon combined heat and power (CHP) district heating system.

Key challenges for the project included co-ordinating approximately 80 sub-contractors and 3,000 staff, while keeping one of Britain’s busiest stations - where a train movement is recorded every 37 seconds - fully operational.

A substantial re-design was also required once work had already commenced and John Lewis was secured as the anchor tenant, adding three months to the construction period. Asbestos was found unexpectedly and with legacy records for the 1960s building unavailable, intrusive surveys had to be conducted during the construction sequence itself.

All this was successfully achieved with an exemplary safety record of only four reported RIDDORs (Reporting of Injuries, Diseases and Dangerous Occurrences Regulations 2013) over the five-year construction period.

The station was opened in two phases and is now fully operational, although some minor works at platform level are due to be completed next month.

The improvements were officially recognised by the National Rail Passenger Survey (January 2016) that registered customer satisfaction at 81% - well above the average for Network Rail managed stations and the previous score of 66% before the redevelopment began.

“In terms of the project challenges, delivery performance and passenger benefits Birmingham New Street is the clear winner in this category. Some initial issues with passenger information were acknowledged, but considered now to have been addressed. The most recent Transport Focus figures show a significant improvement in passenger feedback.”