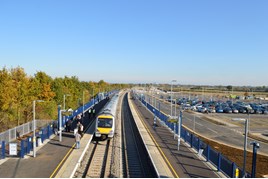 The NRA judges said that “top marks went to an iconic new station which is a credit to all involved.” They praised not only the location but also the staff, which they said were: “setting the highest standards of service and cleaning.”

Oxford Parkway opened to passengers on October 25 2015, and is situated on the first part of the planned East West railway. Currently it is the terminus of the route from London Marylebone to Oxford, but will be a through station later this year.

Construction began in October 2014 and and one year later Oxford Parkway was being served by 100mph trains from the capital.

The station is situated in the site of the former Oxford Banbury Road temporary terminus that closed in 1851.

The station features two platforms and accessible footbridge. While there is no ticket office at the station, there is an information desk. Passengers can buy tickets using the ticket machines installed in the station building.

Within the station building there are toilets and refreshment facilities.

There is a two-level covered bicycle park for 152 cycles next to the station entrance, while there is additional cycle parking at the nearby Water Eaton Park & Ride facility. These facilities also have CCTV coverage. From Water eaton there is a bus service to the centre of the city, while on weekdays buses also serve Headington hospital.

There are 815 standard car parking spaces and a further 41 for passengers with reduced mobility. Realtime information is available regarding the availability of spaces in the car park. There are a further 30 spaces for motorcycles.

“This is a brand new station which was opened in 2015 to make rail more accessible to the north Oxford area and to provide a new half-hourly service to London Marylebone.

“The opportunity was taken to design an iconic new station building which includes an outstanding ticket hall with innovative ticketing and information systems.

“The extensive park and ride area is set in an attractively landscaped area with a bus link to the city centre. The judges found the staff setting the highest standards of service and cleaning.”