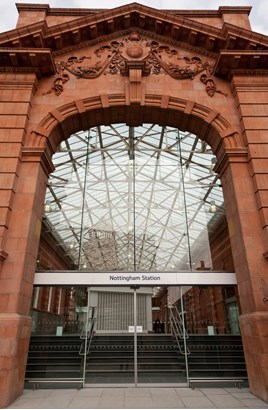 There has been quite the transformation of Nottingham’s station in recent years as part of a huge investment in railways in the city.

This has been recognised by Nottingham being named Large Station of the Year at the National Rail Awards 2016.

Managed by East Midlands Trains, it is also served by CrossCountry and Northern Rail. The station is served by expresses to London St Pancras International, inter-regional trains to Norwich, Cardiff, Leeds and Liverpool, and local trains to the likes of Leicester, Matlock, Skegness and Worksop.

It is now the central part of a large integrated network. The station is now a key interchange for passengers using the city’s tram system, road network and local bus service.

The listed station underwent a £50 million transformation to create a gateway to the city. This formed part of a much larger overall investment in improving transport within Nottingham, including investing in the tram network that serves the station.

The redevelopment of the station was a priority within the city’s business community.

The station’s listed building was refurbished as part of the project. Passengers now use the Porte Cochere, which had been traffic-choked when used as a drop-off point for taxis and motorists. This is now features glazed doors and glazed roof and a transformed area for passengers to wait for their trains. Refreshment facilities and shops have been installed here.

The station’s booking hall was restored and refurbished, while a new ticket officer was also installed.

A new Southern concourse has been opened too and this provides direct access to the Nottingham Express Transit system that now serves the station, as well as the multi-storey car park.

A new platform has also been built at the station, creating additional capacity. It now has seven platforms. These are split into two islands, and platform 7 that opens out to the multi-storey car park. Each island has full facilities including toilets and refreshment facilities.

The station dates from 1848 when it was built by the Midland Railway. It was rebuilt in 1904 and much of the current building dates from them.

“Nottingham has been transformed into a gem amongst the Large stations.

“This listed station has been superbly restored to its original glory and the staff have risen to the occasion with impressive customer service and cleanliness.

“The judges especially commended the new interchange with the tram interchange and the new multi-storey car park which has been fully integrated with the station.”