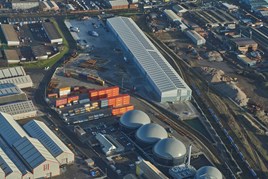 The railway has been recognised as the most effective way to move new cars from factories since the 1960s. But what about moving the raw materials the car industry needs?

Family-owned logistics company AV Dawson has been part of the Middlesbrough landscape for nearly 80 years but the £12.5 million it has invested into its railfreight terminals in the last three years has enabled turnover to increase by 28%.
The final piece of the jigsaw at the East Coast Main Line-connected site is the Automotive Steel Store Terminal. This opened in 2015 and plays a key part in the supply of steel coil to the North East’s growing car industry, particularly Nissan’s Sunderland factory.

ASST is remarkable for three reasons. Firstly, it turned redundant brown-field site, inactive for over 50 years, into something that created and sustained significant employment in Teesside.

Secondly, its four overhead cranes mean that a complete train’s worth of steel can be transferred to lorries for delivery to Nissan every two hours… and also ensures that operations are not delayed by the weather.

What makes this facility really special is its energy system though. It is the first building of its size to combine ground source heat, solar panels and an intelligent heating and ventilation system. AV Dawson can utilise 100% of the clean energy that its steel store generates and the energy saving that it makes has been translated into a financial saving for customers.

“AV Dawson has developed from its road-haulage origins into a significant multi-modal freight operator, transforming and winning new business for the Middlesbrough rail-freight terminal. AV Dawson has not only added value both to the rail freight sector and to the local economy but is an example of the potential that can be realised by focused development of previously underutilised rail-freight terminal resources.”