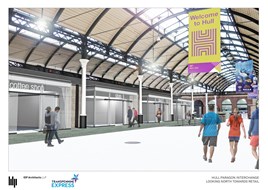 Hull Paragon station is being refurbished, with new toilets and a new waiting room.

The station’s former Pumpkin cafe is being converted into toilets, while a glass-fronted waiting room will extend from the front of the existing building. TransPennine Express is spending £1.4 million on the work, with both new facilities due to be completed in the spring.

There will also be ticket office improvements, including removing counter screens to make it easier to interact with staff. Four retail units will also be built, while a customer information point will also be opened in a part of the station that was formerly redundant. A new arrivals and departures board will also be installed.