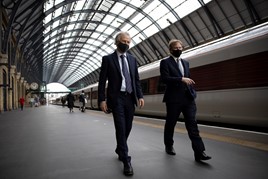 A new and fully integrated public body is to take control of owning and maintaining infrastructure, collecting fare revenue, running and planning the network, and setting most fares and timetables.

The creation of Great British Railways (GBR) has been dubbed as the end to “a quarter-century of fragmentation” and a means to provide “accountable national leadership”.

GBR will absorb Network Rail, although overall strategic direction on infrastructure investment and fares strategy will remain with government.

GBR will provide a single brand (by updating the familiar National Rail and formerly British Rail double arrow) for selling tickets and providing compensation on behalf of operators.

It will also contract private companies to operate the trains and fares it specifies via a concession model that is similar to Transport for London.

The new Passenger Service Contracts will replace the old franchising system and ensure a continued role for the private sector. They will include incentives to run high-quality services and increase passenger numbers, with operators on long-distance routes to be handed more commercial freedoms.

New National Rail Contracts are set to be announced later this year, to run for two years and act as a bridge to the new arrangements.

GBR forms the centrepiece of the Williams-Shapps plan for rail, which was finally published today (May 20) having been heavily delayed by the Coronavirus pandemic.

The White Paper contains ten main outcomes, including a ‘retail revolution’ to roll out Pay As You Go, contactless and digital ticketing on smartphones.

New flexible season tickets have also been announced and will be on sale from June 21, for use by June 28 (see separate story).

Government will also publish a 30-year plan to set out its key investment and strategic decisions, a national accessibility audit, and an environment plan to help achieve the country’s legally binding net zero carbon targets.

“I am a great believer in rail, but for too long passengers have not had the level of service they deserve,” said Prime Minister Boris Johnson.

“By creating GBR and investing in the future of the network, this Government will deliver a rail system the country can be proud of.”

Secretary of State for Transport Grant Shapps added: “GBR marks a new era in the history of our railways. It will become a single familiar brand with a bold new vision for passengers - of punctual services, simpler tickets, and a modern and green railway that meets the needs of the nation.”