FROM THE ARCHIVES: Why GA used locomotive-hauled trains 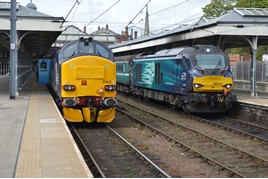 The concept of locomotive-hauled trains is one that the railway has been removing for many years.

From the mid-1980s onwards, inter-regional journeys gradually became the domain of diesel multiple units (DMUs), and fixed formation trains were introduced, offering the benefit of at least one extra vehicle for operators.

TransPennine Express is the honourable exception, being the only daytime operator to order brand new locomotive-hauled coaching stock (other than Caledonian Sleeper, which runs mostly at night) since InterCity bought Class 91/Mk 4 sets in the late-1980s, the last of which was introduced in 1991. DMUs and electric multiple units (EMUs) have been the staple order for many operators.

At the start of May 1993, RAIL reported that Regional Railways had made the Anglia region a Sprinter-only area. The last of the first generation DMUs (refurbished a couple of years before) had been cascaded away, with only one summer Saturday train from Birmingham using a locomotive. All the local and inter-regional trains were in the hands of Class 156s and Class 158s. From the following year Class 150/2s arrived as the ‘156s’ were moved away, but that was to be the status quo. Locomotive-hauled trains were a thing of the past.

Fast forward nearly 24 years, and there are now 13 locomotive-hauled departures (sometimes 16) per day heading for the East Anglian coast on local trains. So, what changed?

Once the Birmingham train finished in October 1993, there was one hauled train to Great Yarmouth in high summer, and this came from London; the rest were DMU operations. Jonathan Denby, Head of Corporate Affairs for Abellio Greater Anglia, explained that, at the time, the only operations that needed locomotives and carriages were the summer Saturday operations, as well as extras for events like the Lowestoft Airshow.

In 1999, when Anglia Railways (as it was then) looked at ways of creating opportunities, it decided to use a Class 50 and Class 55 Deltic that had been stabled at Norwich Crown Point on a handful of trains; but these were advertised well in advance.

That same year, Class 47s were rostered to haul a through train from Great Yarmouth to London Liverpool Street as far as Norwich due to the delayed delivery of eight three-car Class 170/2s that were ordered to enable AR to double the frequency from Norwich to London, and to introduce through trains from Great Yarmouth and Lowestoft to the capital.

Another ‘47’ was used to haul a rake of two carriages on an interim basis, but that tiny burst of activity soon died down again. It would re-appear sporadically for brief interludes when locomotives (always ‘47s’) were stabled for standby duties, but this was often during the winter period when DMUs were out of action with wheel flats.

However, Denby says that on the branches from Norwich there was a massive growth in local line patronage.

“It was in 2010 when things began to become tight,” he explains. Causing this ‘tightness’ was the need to overhaul and refurbish trains, which tends to happen at roughly the same time, combined with a new timetable being introduced by National Express East Anglia and a continued boom in passenger numbers.

“We put in a much better frequency and the passengers increased. Norwich-Sheringham had 200,000 passengers per year in 1996; it is 600,000 now. Likewise, there was a 10% growth on Ipswich-Lowestoft usually, but when we added capacity in 2010 that rose to 100%. On Ipswich-Cambridge we needed to increase capacity from two to three-car ‘170s’, while the Norwich-Cambridge route worked really well and went from two to three-cars.”

The competition for the railways varies on the different routes. For Great Yarmouth, the competition is the X1 bus, which offers air conditioning, free WiFi, USB ports, cheaper tickets and a link right into the heart of Norwich city centre. There is also a 15-minute frequency, although the routes it uses are increasingly busy thanks to council decisions regarding remodelling roads.

This capacity increase stretched the fleet. NXEA had 26 DMUs, and 23 were needed. Also to be considered are the rural aspect of the region and the number of level crossing accidents where trains have hit farm equipment. This was highlighted in April 2016 when 170204 hit a tractor near Thetford. It has been out of service ever since.

In June 2015 DRS Class 37/4s replaced the ‘47s’. By then the Type 4s had worked pretty solidly for around four years, although DMUs were hired for most of 2012 so the need wasn’t there.

In late-2014 Greater Anglia and DRS agreed a deal for permanent use of the locomotives and stock until the end of the franchise (planned for October 2016). Denby says the decision was made to use ‘37s’ as DRS was spending significant sums of money on the Type 3s against what was planned for the ‘47’ fleet.

Locomotive-hauled trains were not always the answer for the area. There had been a wide-ranging hunt for that rarest of beasts, a spare DMU. An Arriva Trains Wales Class 150/2 and two London Midland Class 153s were hired at various points, but these were not long-term deals.

Locomotive-hauled coaching stock (LHCS) was the answer. Today the ‘37s’ operate between Norwich, Great Yarmouth and Lowestoft. They have a booked duty and are crewed by GA drivers and guards. The locomotives must be fitted with Driver’s Reminder Appliance (DRA) as part of the GA safety case, and must also have fire suppression equipment; in the event of a fire in the rear locomotive an extinguisher must go off. So far five locomotives have been fitted with the equipment and used in Anglia (37405/419/422/424/425). The ‘37s’ and Mk 2s are maintained by DRS at Norwich Crown Point, with exams taking place on a Sunday. The work is contracted to Arlington Fleet Services, and the ‘37s’ return to Crewe Gresty Bridge for bigger exams every few weeks. Locomotives used by GA are in the XHAC pool, with those hired by Northern for its Cumbrian Coast activities in the XHCC pool. One anomaly is 37425 Sir Robert McAlpine/Concrete Bob, which is in the former pool, but for most of 2016 has been used in Cumbria covering for failed ‘37s’.

There have been performance issues with the ‘37s’ in GA, and in particular the quality of the stock. Air conditioning failures and faulty toilets have been the major gripes, and Denby acknowledges the problems, revealing that GA and DRS have been in dialogue about them, and now that the contract is in place until 2019, how they will be addressed. But, he points out, since the ‘37s’ have arrived, the reliability of the set has been higher than that of the ‘47s’. He said: “The ‘37s’ are more reliable undoubtedly. One locomotive seemed to have more faults , but that has been resolved. They have been pretty good and we have noticed that in performance.”

Recently, particularly when Norwich City FC have been playing at home, the ‘37s’ have been used on Saturdays, although there is no booked duty for them. Says Denby: “They run ad hoc. There is a diagram on a Summer Saturday for them, but not in the winter, although we have looked at it.”

In July 2015, the ‘37s’ were joined by a second locomotive-hauled set; this time using two Class 68s and a rake of three Riviera Trains Mk 2s that were hired through DRS. This set was needed to cover for the ‘170’ damaged in April last year. Again, this set was due to leave GA in September 2016, but is now scheduled to leave in March.

“It’s absolutely here to replace 170204,” says Denby. The costs of the ‘68’ and Mk 2 hire are provided through insurance claims as a result of the accident, of which the final cause has yet to be determined. “What we know about that is there were no terms relating to Greater Anglia’s operation of the train. We know that is not an issue from our point of view,” says Denby, who adds that the ‘68s’ “are part of a ‘clear cost’ to the accident.” However, he adds: “more pointedly, they are providing a service.”

Class 68s were not specified for the duty, but they were available. “We wanted to make sure that what they put forward they could deliver in a robust manner and not compromise autumn operations.” The latter was crucial because in 2014 and especially 2015, trains were cancelled on the branches after high leaf-fall caused DMUs to be out of action due to wheel flats, with buses replacing them. DRS operates the railhead treatment trains in the area, and in the case of the ‘68’-hauled train, also provides the drivers for this operation.

The ‘68s’ also have a booked duty, again between Norwich, Great Yarmouth and Lowestoft. “The whole premise of where you deploy the set is where is it most effective, and where DMUs can be moved. It was simplest to put them here,” says Denby, while talking to RAIL on the 1005 Norwich-Lowestoft on December 21 2016, hauled by 68025 Superb.

“They looked at a number of places to operate. Resilience was looked at. What is the most practical? That is what drove the decision to run them where they do.” DRS provides three drivers per day for the set. The first prepares the locomotive and drives it from the 0652 Norwich-Great Yarmouth until the 1057 from Lowestoft returns to Norwich. He is then relieved by a colleague who will either shunt the set into carriage sidings adjacent to the station, or will drive the 1205/1405 Norwich-Lowestoft and 1257/1457 returns, before being replaced by a third driver who begins with the 1638 Norwich-Lowestoft and continues until the 2205 Norwich-Lowestoft returns empty to the Norfolk city.

Regarding its future, Denby says: “With the second set you would expect there should be resilience when 170204 is back.” Does that mean it will be returned to DRS? “I suspect the cost would be prohibitive. Had there been DMUs available then this wouldn’t have happened,” is his honest answer.

The ‘68s’ and Mk 2s are known to be pricey options, so were others considered? Denby confirms other possibilities were investigated, including VivaRail’s Class 230 D-Train diesel EMUs. “We looked at VivaRail for long-term, and we looked at other options. VivaRail’s issue was timing and everything that needed to be prepared to get them into service. There were also time constraints and added to that, the franchise process was an issue. That whole combination meant VivaRail was not an option in the end.”

This may be tempting fate, but LHCS cannot continue forever. GA has bought a fleet of bi-mode trains from Stadler due for delivery from next year, and which enter traffic in 2019. They will replace not only the 15x and ‘170’ fleets, but also the ‘37s’. That will be the end of LHCS on the branches.

“There is an opportunity with them to give rail prominence and to promote it,” says Denby. “The product will be excellent. They will be brand new and in line with expectations of modern trains.”