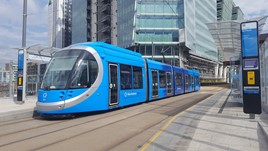 Twenty-one catenary-free trams will be built by CAF for West Midlands Combined Authority, in an £83.5 million deal that includes an option for a further 29 trams.

They will be from the Spanish manufacturer’s Urbos platform, with delivery scheduled from late 2021. The initial order doubles the size of the existing tram fleet, and the deal includes a 30-year technical support services and spares supply.

“These next-generation trams are battery-powered, designed to operate on new sections of the line between Grand Central and Hagley Road which are free of overhead cables,” said West Midlands Mayor Andy Street.

CAF UK Director Richard Garner added: “The CAF Urbos tram will be the first example of battery technology being used in a high-intensity passenger service here in the UK.”

The new trams will join an existing 21-strong Urbos tram fleet in Birmingham.

Plans for a £700 million eastward extension of the Midland Metro from Birmingham city centre towards Solihull have been delayed.