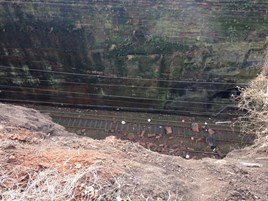 No services are currently running into or out of Liverpool Lime Street, following the collapse of a retaining wall between the city’s main station and Edge Hill.

The wall collapsed at approximately 1745 yesterday (February 28), blocking all four running lines and damaging overhead wires. Network Rail said that the wall had been overloaded with concrete and cabins by a third party.

Following preliminary inspections by NR engineers, services are not expected to resume until Monday March 6, while rubble is removed and repairs made. More precise forecasts on how long the station will be closed are expected shortly.

In the meantime, Northern, TransPennine Express, London Midland and East Midlands Trains services will terminate either at Liverpool South Parkway or Manchester stations. Virgin Trains will terminate at Runcorn.

Rail replacement buses are in operation, while tickets from various operators will be accepted on Merseyrail services.

A Network Rail spokesman said: “Train customers are advised to check before they travel at nationalrail.co.uk for the latest information and with train operators.

“Five large containers, each holding many tonnes of material, have been stacked by a third party on elevated land beside the collapsed section of wall.

“With part of this land having given way, these containers need removing to make the cutting safe and prevent further slips. Only then can we get safe access to the tracks below and develop a plan for the clear-up and repairs.”