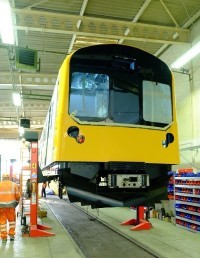 Vivarail’s first two-car battery unit is in the final-build stages and is due to run on the national network this summer, the company confirmed on February 21.

Two-car 230002, converted from redundant D-Stock, has been approved for passenger use and is the first production battery unit in the UK. The company described it as “a simple and elegant design that will allow battery trains to replace diesel units with a minimum of time and effort”.

Power is provided by two lithium ion batteries per vehicle (four per train). This provides 106kWh, requiring an eight-minute charge at the end of each journey. Vivrail said that with a ten-minute charge that range is extended to 50 miles. As battery technology improves, so these distances can be extended.

In terms of safety, Vivarail said: “The lithium ion batteries on our trains work only within defined temperature parameters and performance is constantly monitored - so should an incident occur it can be quickly contained and the gases will be filtered before being allowed to dissipate naturally.”

A seven-year lifespan is expected for the batteries. They fit into a battery raft using the same space as a diesel genset.

The two-car ‘230’ can be charged via existing overhead line electrification or third-rail, while for non-electrified routes Vivarail has developed a static battery bank as an alternative charger.