Vivarail reveals new D-Trains will be available in 2018 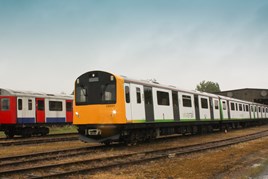 Vivarail has confirmed that the company’s first two completed D-Trains will be available for delivery early next year.

Construction of the two trains is under way at the company’s workshop at Long Marston, where they will be made available as either two- or three-car units, and as either diesel or battery-powered variants.

Offering the refurbished former London Underground D-Stock vehicles in a choice of motive power will enable operators to run the D-Trains on either electrified or non-electrified routes, although it is not yet known where they are likely to enter service. They are currently being advertised for sale.

Speaking exclusively to RAIL, Vivarail Chairman Adrian Shooter said: “We have two trains which we’ve just started building, and which are now available to potential buyers. I’ve no idea what response we’ll get, but there are lots of people expressing an interest, so we’ll see what happens.”