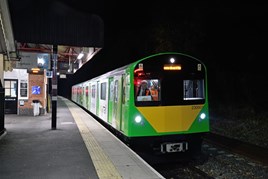 Vivarail has confirmed to RAIL that battery-powered and hybrid diesel versions of the D-Train have both entered advanced stages of development.

It opens up the intriguing possibility of operators acquiring the former London Underground stock to run on either electrified or non-electrified lines, by using its diesel engines, electric motors or on-board batteries.

Chief Executive Adrian Shooter exclusively told RAIL that both vehicles would begin testing at the company’s Long Marston base by the end of this month.

“We are building prototype battery and diesel hybrid test vehicles, which are both quite well advanced. They will leave the workshop in late February to run around the test track here at Long Marston,” he said.

“The purpose is to check out if the batteries will do what the manufacturers say they will. We know theoretically how far they will run but we want to know practically, too.

“We have a number of potential customers interested, as it throws up the option of being able to run on an electrified system and then beyond the power supply.”

First of five Class 484s delivered to Isle of Wight