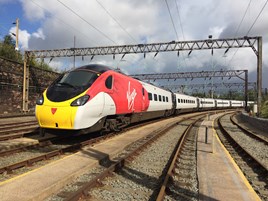 Nine-car 390010 is the first train to be treated at the facility, which opened in June (RAIL 831). All 57 Class 390s are to be treated at the site - they are being repainted in VT’s ‘flowing silk’ livery as applied to the Virgin Trains East Coast Azuma fleet that enters traffic next year.

Nick Crossfield, Managing Director, Alstom UK & Ireland, said: “This is the first work we have completed at our important new Widnes modernisation facility. Not only is it on time and on budget, I am equally proud of the fact we employed 80 people locally, including five new apprentices, to deliver this beautiful new paint job.”

The repaint was planned by Angel Trains, which owns the trains. However, the Department for Transport specified that the livery needed to be neutral ahead of the West Coast Partnership franchise bidding. VT then added its own branding.