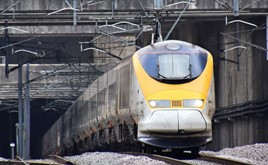 The UK rail industry must find a way to influence key decision-making in Brussels after Britain leaves the European Union.

That is the message from the chief executive of UK Transport in Europe Mark Watts, who warns that the UK might have to implement European Technical Specifications for Interoperability (TSIs) despite not having any formal representation at the European Commission, European Railway Agency or its TSI working groups.

In the event that the EU Withdrawal Bill (WAB) is passed by the next Parliament, the UK will be required to implement European TSIs for the length of any transition period that is designed to enable a new UK/EU trade deal to be negotiated.

Under the terms of the WAB, that transition period would last until at least the end of 2020, although Watts (a member of the European Parliament from 1994-2004) has speculated that it could last much longer - given that it took seven years for the EU-Canada Comprehensive Economic and Trade Agreement to be reached.

Addressing the Railway Industry Association annual conference in London on November 7, Watts said: “The industry needs to adapt to Brexit now. Negotiating a trade deal is likely to be a long process, so we need a plan for influencing Brussels during that transition."