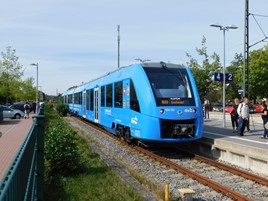 As Alstom put its hydrogen multiple unit into traffic in Lower Saxony on September 17, the company confirmed significant interest from the UK in the technology.

Two hydrogen-powered iLints are running between Cuxhaven and Bremerhaven in Germany. Representatives of Eversholt Rail and Transport Scotland travelled on the first revenue-earning train on September 17.

Alstom plans to convert Class 321 electric multiple units owned by Eversholt Rail for use in the UK. The work will be carried out at the company’s Widnes facility.

There are variations as to what could be offered, and no deal has yet been signed for an operator. Alstom points out that there are significant hydrogen facilities in Teesside and Merseyside, while Transport Scotland has publicly confirmed its interest in alternative energy solutions.