Trans-Pennine upgrade to include electrification 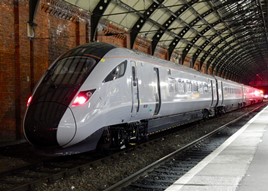 The proposed trans-Pennine route upgrade will include electrification - a year after extensions of the wires to Swansea, the Lake District and on the northern section of the Midland Main Line were cancelled.

Writing to Railway Industry Association Chief Executive Darren Caplan, Secretary of State for Transport Chris Grayling said the project was expected to account for a third of anticipated enhancements expenditure in Control Period 6 (2019-24).

Grayling wrote: “Unlike some other investment projects, the trans-Pennine upgrade will be a rolling programme of enhancements, including both major civil engineering projects and electrification.”

He added that improving journey times would involve rebuilding and relaying “most of the trackbed” from Manchester to York.

Network Rail is finalising options for the route upgrade, and Grayling told Caplan that he has instructed NR to “prioritise those elements which bring the quickest passenger benefits”. Such elements could include track realignment to improve line speeds.

NR is working with the Department for Transport, in consultation with Transport for the North, .to establish the best way of upgrading the route. It expects to deliver its final project plan later this year, with initial works beginning in spring 2019.