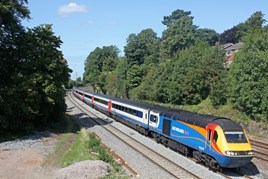 The age and quality of rolling stock on East Midlands Trains (EMT) is passengers’ single biggest area of concern, according to research conducted by Transport Focus as part of the consultation into the next East Midlands franchise.

TF found that while impressions of EMT were positive overall, passengers described the interior design across its fleet as “basic”, and contrasted the rolling stock with that of Virgin Trains and London Midland, which operate over parts of the EMT network.

Increasingly, passengers regard free wireless internet and plug sockets as essentials - internet access is regarded as the third-highest priority for improvement, behind value for money and getting a seat.

Value for money satisfaction is at 66% for local journeys, 58% for Liverpool-Norwich, and 42% for London services. The latter figure compares with a national average from the National Rail Passenger Survey of 58% for long-distance operators.