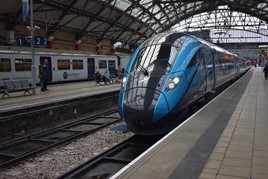 Insufficient power and a lack of available new trains forced TransPennine Express to cancel up to two-thirds of its services on its new Newcastle-Edinburgh route, and to introduce an emergency reduced timetable on January 6.

On January 3, TPE had 17 booked trains north of Newcastle, but only six ran. On January 6, that had been reduced to eight booked trains plus one empty coaching stock service - which all ran.

TPE is also being forced to run its bi-mode trains on diesel power on part of the route, as there is not enough power in the overhead wires between Marshall Meadows (north of Berwick) and Innerwick (near Dunbar).

During the disruption, trains formed of Hitachi Class 802/2s must run on diesel power for part of the journey north to Edinburgh, because the wires are unable to accommodate more than two Class 80x trains in the same section.

Network Rail and TPE confirmed that the trains were running on diesel, while a handful of LNER Azumas also run on diesel on Sundays. TPE ‘802s’ must run on diesel mode between Berwick and Longniddry (almost 54 miles).

A TPE source told RAIL: “TPE and NR are working with other stakeholders to resolve the problem. But until that is completed, there must be a reduced number of planned daily services north of Newcastle - because despite NR paying for additional fuel costs, the Class 802/2s operated by TPE do not have sufficient fuel capacity to sustain the additional diagrammed mileages in diesel mode.

“We are currently running on diesel for pre-defined short sections on the ECML, between Chathill and Longniddry. Network Rail is currently going through a programme of upgrades to key electrical feeder stations on the ECML, which once completed will allow us to run on electric power all the time.”

NR told RAIL: “We are delivering a £1.2 billion upgrade of the East Coast Main Line. As part of that investment we will be improving the power supply on the line between Edinburgh and Berwick to allow more electric trains to run on the route.”

One TPE source told RAIL that the trains will be able to operate the full diagrams, despite the use of more diesel than planned, once a maintenance backlog (causing a lack of availability) has been completed.