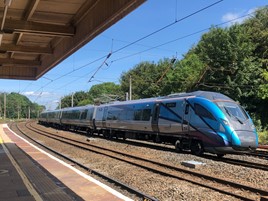 TransPennine Express 397005 is the first of 12 five-car 125mph electric multiple units accepted by the operator.

The CAF-built train completed most of its fault-free running in Spain, where it was constructed, and following final tests in the UK, it has been added to the TPE fleet ahead of an Autumn launch on the Liverpool/Manchester-Glasgow/Edinburgh routes that were originally due to start last December.

The ‘397s’ are one of three new fleets ordered by TPE, although none are in service. All are branded Nova. Chris Nutton, TPE Major Projects Director, said: “I’m really pleased that we’ve now accepted the first of our Nova 2 trains, meaning we now have at least one of each of our Nova fleets. The project is progressing as planned.”

CAF UK Director Richard Garner said: “The high-quality, high-performance trains are a variant of the highly successful Civity platform will provide TPE customers across the North of England and Scotland with a transformed on-board experience, making a real difference to this important and busy rail network.”

Eversholt Rail owns the trains. The rolling stock company’s Client Relations Director Stephen Timothy said: “This is the culmination of fantastic team work across TPE, CAF and Eversholt Rail and a big step towards bringing these brand new trains into service for TPE passengers”