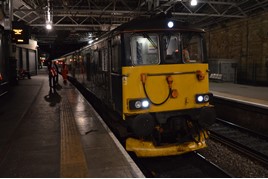 Sleeper trains could connect Scotland’s Central Belt with Thurso on the country’s northern coast, if plans being developed by consultant SYSTRA turn into reality.

SYSTRA is looking at using Mk 3 sleeping cars that are being displaced from Caledonian Sleeper services by new stock being built by CAF in Spain. The proposed service would include a portion attached or detached at Inverness, and would run to Edinburgh and Glasgow via the Highland Main Line.

SYSTRA Principal Transport Planner James Jackson told a conference in Inverness on January 29 that the concept behind the idea was to offer improved connectivity within Scotland, promote tourism, and link with ferries to the Orkneys. He added that the idea also gave an opportunity to develop a parcels service for northern Scotland.

Transport Scotland Rail Director Bill Reeve reacted by saying that he was following the study with interest, before cautioning that more work would be needed to examine costs and revenues.

Jackson said conservative estimates suggested that annual demand for a Thurso Sleeper could be 29,000 trips, with 8,500 from Caithness and Orkney and 20,500 from Inverness.

His outline timetable showed a 1930 departure from Thurso, leaving Inverness at 0130 to arrive at Edinburgh at 0523, then leaving at 0703 for Glasgow with an arrival time of 0811 via Carstairs.

Northbound trains might leave Glasgow at 2125, Edinburgh at 2228, and detach an Inverness portion between 0214 and 0254 before arriving in Thurso at 0742, in time for the Orkney ferry. He noted that the project’s objective of connecting with ferries was challenging. Separately, Reeve revealed that Transport Scotland was looking at ferry options.