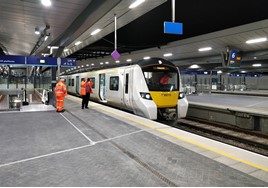 Testing of Class 700s at the rebuilt London Bridge began on January 1. Eight-car 700015 became the first passenger train to cross over the new Bermondsey dive-under before arriving at the newly built platform at 1924. It ran from New Cross Gate.

Tests were then carried out for platform and signal interface checks, before it then ran to Blackfriars via the newly commissioned Metropolitan and Blackfriars Junctions.

Direct trains from Blackfriars to London Bridge stopped in January 2015, but will resume this month once further testing and driver training has been completed. A full service introduction is planned for May.

Platforms 4 and 5 are planned to be dedicated to Thameslink. Network Rail has remodelled the track layout at the station, with the dive-under at Bermondsey and a new viaduct over Borough Market and Borough High Street. The latter is used by Southeastern trains serving Charing Cross.

“This has already been a year of ‘firsts’, and this test train was a key moment for Thameslink,” said NR Thameslink Programme Director Simon Blanchflower.