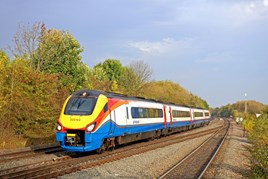 The consultation run by the Department for Transport for the next East Midlands rail franchise continues to divide business and community leaders at the northern and southern ends of the Midland Main Line.

Closing on October 11, the DfT’s consultation document drew conflicting responses to a controversial proposal to speed up journey times and reduce overcrowding on long-distance services to London St Pancras from Nottingham, Derby, Sheffield and Leicester, by removing calling points south of Kettering.

This would reduce journey times between Sheffield and London to less than two hours for peak and off-peak services, but would increase journey times from stations further south, including Bedford, Luton Airport Parkway and Wellingborough.

These stations would instead be served by new 12-car electric multiple unit commuter stopping services between Corby and London. Passengers from these stations could also be required to change at Kettering for destinations further north if direct inter-city services are re-scheduled to run non-stop.

The proposal has been welcomed in a joint consultation response from representatives of the Sheffield City Region, but has been sharply criticised by the England’s Economic Heartland’s Strategic Transport Forum.

The Forum, which represents local authorities and local enterprise partnerships across an area stretching from Oxfordshire and Milton Keynes to Luton, Northamptonshire and Cambridge, said that such a move would damage the area’s potential for long-term economic growth, which relies on providing improved connectivity such as East West Rail.

Forum Chairman Heather Smith said she was “deeply concerned” that alternative arrangements would have “an unacceptable impact on passengers”, and has called on the DfT to hold a second round of consultations before the franchise process is taken any further.

The current franchise has been run by Stagecoach-owned East Midlands Trains since 2007, but will end in August 2019. The DfT currently intends to issue an Invitation to Tender in April 2018 before a contract award is made to the winning bidder in spring 2019.