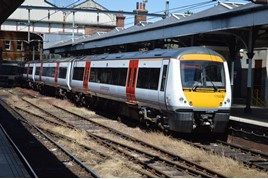 RAIL can reveal that an Invitation to Tender (ITT) will be issued to supply 11 three-car self-propelled units for services due to commence in 2024 between Oxford, Bedford, Aylesbury and Milton Keynes.

It follows the conclusion of a rolling stock market engagement exercise that had been under way since November 2018, which involved workshops and meetings with manufacturers, suppliers and rolling stock operating companies (ROSCOs) from across the market.

EWR Co Chief Executive Simon Blanchflower said: “Reactions from the rolling stock market have been extremely positive. We’ve taken a purposeful approach to procurement, using this engagement period to effectively de-risk the project by working with the market to understand what’s available to meet our entry into service requirements, before defining our specifications. Thank you to anyone who has engaged with this process so far - your input has been invaluable.”

EWR Co was established in 2017 to oversee and accelerate the delivery of the East West Rail scheme to restore a direct rail link between Oxford and Cambridge (closed as a through route in 1967).

The line is being reopened in stages, with services running from Oxford to Bedford, Milton Keynes and Aylesbury from 2024, and along the full route to Cambridge some three to four years later.