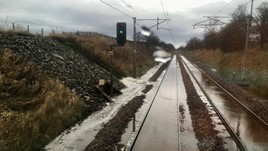 More than 50 recommendations have been made to increase the resilience of the rail network to extreme weather.

They are included in the findings of two independent reviews commissioned by Network Rail in the wake of the fatal derailment that occurred near Stonehaven last August, following a sustained period of heavy rain.

Published on March 17, the reports are based on the work of two separate task forces led by Lord Robert Mair and Dame Julia Slingo.

The reviews conclude that it would not be practicable to rebuild nearly 200,000 slopes alongside 20,000 miles of track. However, much more can be done to improve culture, competencies and knowledge within NR.

Recommendations include upskilling the workforce to better access and interpret weather data and technology, and to carry out inspections of earthworks and drainage. Greater use of drones and helicopters for inspections is also recommended, as is the acceleration of the deployment of new weather forecasting capabilities through digital platforms.