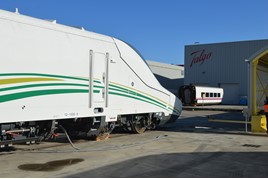 Spanish train manufacturer Talgo plans to build trains in Longannet, in Scotland, after confirming that its preferred location for its UK factory will be at the site of the closed power station.

The company made the announcement at Westminster today (November 14), following an 18-month search for a UK site. It also confirmed that a Research and Development site would be built at Chesterfield, although it would not be drawn on the relationship between the two sites.

It is expected that up to 1,000 people will be employed at the Scottish facility. Construction is expected to start in February 2020, with work on trains starting 18 months after that. The factory will cost £40 million to build.

Talgo intends to make use of part of the existing site, and is working with the Scottish Government to develop the branch line to the former power station, which could include the return of passenger trains. Discussions have also taken place about electrifying the line.

The site was chosen because of the proximity of rail, road and sea (both Grangemouth and Rosyth ports are nearby), while the company said there are also skilled workers available in the area. Talgo also wants to create a ‘pipeline’ of engineers and innovators - it has created what it calls an ‘all Britain’ strategy designed to protect and develop the UK supply chain as well as train young people.

“This has been a tremendously challenging mission for Talgo, and I have personally seen excellence in all corners of the UK,” said Carlos de Palacio, president of Talgo and grandson of the founder.

“The establishment of a manufacturing facility at Longannet is a significant part of Talgo’s future strategy. However, our plans do not end in Scotland. Linked to our ‘all Britain’ strategy, we intend to create opportunity and harness skills across the UK.

“Talgo’s aim is to establish true UK manufacturing - rather than assembling from parts made elsewhere. This will be a team effort, requiring the ‘Best of British’. Our 18-month mission has revealed a determination and willingness across Britain to do just that.

“Although there can only be one factory site, we have developed excellent relationships with areas that we have visited. We are continuing those relationships to ensure that Talgo’s ‘all Britain’ strategy provides opportunity across the UK. The Innovation Centre at Chesterfield will create a focus for some of this work.

Talgo UK Director Jon Veitch said: “When Talgo started this process, we were looking for just one site. However, we soon realised that all parts of the UK had something to offer.

‘We have learned about the many rail-related initiatives across the UK, intended to boost capability for research, development and testing. There is an engineering renaissance under way, and I want Talgo to be a leading partner. As part of Talgo’s commitment to the UK-wide supply chain, our proposed second facility in Chesterfield will act as a catalyst.”