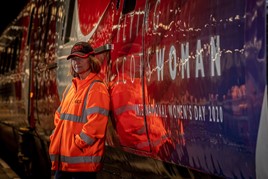 Critical skills shortages in the rail industry are putting the success of new major infrastructure projects at risk, according to research by the National Skills Academy for Rail (NSAR) and City & Guilds.

The Back on Track report, launched on November 23 ahead of the National Infrastructure Strategy launch two days later, reveals that approximately 120,000 more people need to join the rail workforce within the next decade in order to meet the skills demand, across a range of roles.

The rail sector’s ageing workforce (28% of workers are over 50 years old) means that about 15,000 people could retire from the industry by 2025. Brexit is also expected to reduce the access to overseas workers, with the proportion of EU workers already dropping from 17% to 15% between 2016 and 2018.

NSAR Chief Executive Officer Neil Robertson said: “As we look to invest in new talent to fill future skills gaps in the rail industry, it’s important to note that we also have a valuable opportunity to improve social mobility across the UK."

The report makes a number of recommendations to address the skills challenge “before it’s too late”, including developing strong career paths that attract and retain talent and utilising the green agenda to attract the younger generation to consider a career in rail.