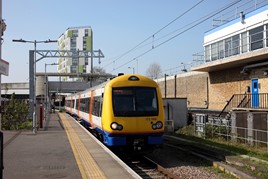 London Overground’s Gospel Oak-Barking line reopened in time for the start of service on January 15, following an eight-week closure by Network Rail to complete electrification of the route.

Possession was given up at approximately noon on January 14 for a ghost service to run, before the first timetabled train departed from Barking at 0633 the following morning.

Newly energised overhead line equipment (OLE) will now be fully tested in between normal services and at night, ahead of new four-car Class 710 electric multiple units entering traffic in the spring.

These trains will replace the current stock of two-car Class 172 diesel multiple units, which will remain in service until driver training and route testing is completed. RAIL understands that they will be phased out until all ‘710s’ become available, meaning that for a period EMUs and DMUs will run concurrently.