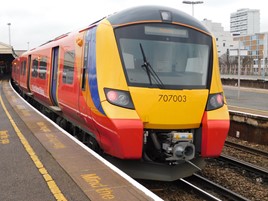 New trains made redundant before they even entered traffic are set for a new home, with Southeastern signing a deal to lease the 30 five-car Class 707s.

The trains had been ordered by South West Trains in 2014, as part of a Government-led High Level Output Specification (HLOS) capacity improvement programme on routes from London Waterloo. They were built by Siemens in Krefeld (Germany) in 2015-17.

When FirstGroup/MTR was awarded the South Western franchise in 2017, it was announced that the entire HLOS rolling stock (including the ‘707s’) would be replaced by 90 Bombardier Class 701s. At that point, the ‘707s’ had not entered traffic (RAIL 824).

Owned by Angel Trains, the ‘707s’ were due to have been replaced by the 701s’ from the end of last year. However, the latter, like every other Bombardier Aventra order, have since been delayed by software issues.

Southeastern is taking the five-car trains as part of its Direct Award announced on March 30 (RAIL 902). Spokesman Paul Prentice told RAIL: “We are in the early stages of planning for additional capacity for the Southeastern network - this is part of the Direct Award contract announced with the Department for Transport."