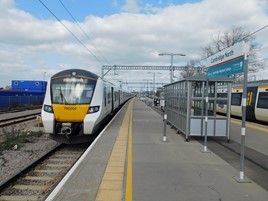 A report by GTR for the Energy Executive Emergency Committee’s investigation into the incident found that when the overhead line equipment AC voltage dropped below 49Hz for a matter of milliseconds, software on the Siemens trains caused them to make a protective shutdown on their 4 Quadrant Controllers (4QC). None of GTR’s other fleets were affected.

When the 4QC shut down, the trains switched to battery power, resulting in ventilation systems running on fan only, emergency lighting activated, and onboard power being cut off.

Attempts were made to repower the train, but those trains fitted with Train Control Management System software level 3.27 or above were unable to successfully do the reset. Under that version of the software, the ability for drivers to undertake a battery reset was removed. Those with level 3.25 or below were reset successfully.

Twenty-seven of the trains were recovered, but the remaining trains required a technician with a laptop computer to attend each train.