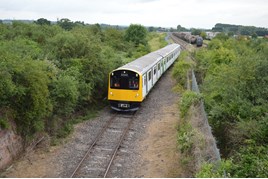 Shooter responded that while he did not think electrification should be abandoned entirely, his company was well-placed to offer its battery-powered variant of the modular D-Train as an alternative solution on appropriate regional routes.

The company also has a single-car battery-powered D-Train that is currently undergoing testing, and which is forecast to be available to interested parties from early 2018. Its development is partially being supported by grant funding awarded under the Accelerating Innovation in Rail competition run by Innovate UK. An EMU or hybrid version of the D-Train will also be made available.

Shooter told RAIL: “As the person who with Iain Coucher persuaded a previous Secretary of State to resume electrification, when I was chairman of ATOC, I think it is very disappointing that Grayling has had to make these announcements.

“Vivarail is at the forefront of these developments. The prototype three-car train which carried passengers to Rail Live happens to be powered by diesel engines driving alternators. However, right from the start we intended that any source of power could be used.

“To this end, we have been developing a battery version and have built and operated a battery-powered test car. This has demonstrated that even with today’s battery technology, quite considerable distances can be run between charges."