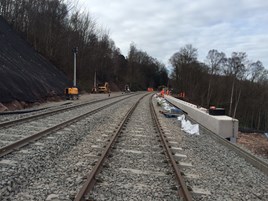 The Settle-Carlisle Line reopened to passengers today (March 31), following more than a year of repairs by Network Rail to put right a 500,000-tonne landslide near Armathwaite.

A section of line had been shut to trains since February 9 2016, after NR engineers detected significant ground movement at Eden Brows (eight miles south of Carlisle), caused by heavy rainfall and erosion by the River Eden 70 metres below.

A 100-metre stretch of track had subsided 1.5 metres, forcing Northern to run rail replacement bus services between Appleby and Carlisle until the line could be repaired.

The engineering solution chosen by NR was to drill two rows of high-strength piles into the surrounding bedrock (RAIL 810), upon which a 100-metre-long concrete shelf has been placed to support the railway, at a total cost of £23 million.

The first train to traverse the rebuilt section was a Network Railtest train on March 23, while the first scheduled passenger train was today’s 0550 Carlisle-Appleby operated by Northern.

Rail Minister Paul Maynard said: “Network Rail, contractors and train operators have together worked hard to get this historic line, which first opened 130 years ago, running again. Our railways are crucial to our economic future and whether it’s improving services or completing essential repairs, the commitment is the same. That is why I am delighted to be part of this event marking such a significant moment.”

Northern Regional Director Paul Barnfield added: “The Eden Brows engineering project has been a mammoth task for Network Rail, and we are delighted to once again be able to offer a direct service between Settle and Carlisle.”