Scottish Azumas to start on August 1 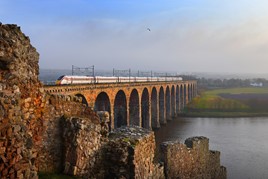 The operator confirmed that the first train will be the 0540 Edinburgh Waverley-London King’s Cross, the ‘Flying Scotsman’, arriving at 0940.

The first northbound train will be the 1730 King’s Cross-Edinburgh the same day. They will be formed of nine-car Class 800/1 bi-modes.

LNER introduced Azumas on May 15 on the Leeds route, and to Hull the following day. By the end of June there will be six Azumas in action.

“The launch of the first Azuma trains to and from Edinburgh and North East England is a pivotal moment for LNER in demonstrating the transformation of services for our customers and communities that we serve,” said LNER Managing Director David Horne.

“Establishing new standards in rail travel is part of our DNA, and the new Azuma trains are already making the customer experience better than ever. They will transform travel for customers with improved reliability, greater levels of comfort and an average of 100 more seats on every train compared to the current fleet,” he added.

“Alongside the introduction of these new trains, we have also worked closely with Transport Scotland to upgrade platforms at Edinburgh Waverley to support longer trains with more seats.”