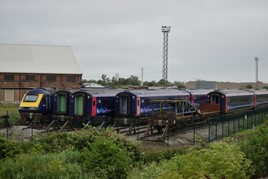 An unintended consequence of a move to alternative fuels could result in nearly-new rolling stock being “left in a siding to rot”, claims Angel Trains Chief Operating Officer Kevin Tribley.

“If we are looking at carbon-neutral and efficiencies as an industry, it is a shame we are not being efficient in the use of our assets over long periods,” he told the All-Party Parliamentary Rail Group on July 9.

However, he conceded that some rolling stock currently in service could be converted to use new technology, saving them from the scrapyard.

In the meantime, he expects “another boom of activity that will take the existing diesel fleets with some form of alternative traction” by 2025.

Tribley also joined a chorus of railway industry bodies and companies in calling for a long-term vision from the Government on electrification: “What is critical for us is a consistent policy and strategy on electrification. We’re a long-term industry and we require long-term policy to make big-ticket investments and ensure the railways are financed and used in an efficient way.”