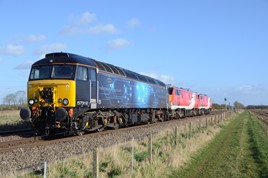 Operated by Rail Operations Group, two Class 91s and a rake of eight Mk 3s will be used to test the new infrastructure, ahead of East Midlands Railway introducing planned electric services on the route from December.

The Midland Main Line is being electrified from Bedford to Kettering/Corby and Market Harborough.

Rail Operations (UK) Limited, ROG’s parent company, is leasing 91122 and 91128 from Eversholt Rail for the project and is actively looking to expand its operations to other schemes.

The on-board test equipment is being supplied by Data Acquisition & Testing Services Ltd (DATS), which will carry out the various tests on the infrastructure. Testing and data equipment will be carried aboard the Mk 3s (the former ‘Pretendolino’ rake of stock last used by TransPennine Express).

The two ‘91s’ will be fitted with modified pantographs to enable analysis of the overhead wires. There is also the option to include a third electric locomotive in the centre of the train.