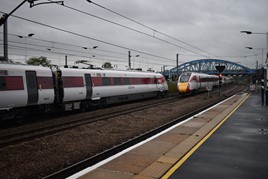 The RMT union has demanded a meeting with LNER management over what it describes as “an intolerable working environment” on the operator’s new Class 800/801 Azuma fleet.

In a members’ update released on October 21, RMT General Secretary Mick Cash said serious concerns had been raised about “inadequate facilities which are detrimental to passengers and staff alike”.

Concerns have been raised about available luggage space, with Cash remarking: “With the upcoming Christmas period there will likely be a large increase in health and safety issues and stress for frontline staff.”

An LNER spokesman told RAIL: “As we introduce new Azuma trains across our network, collecting feedback is as important as ever."