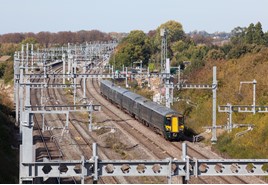 The Railway Industry Association (RIA) wants the Government to increase funding for research and development of rolling stock and commit to ending stop-start funding. It also calls for assurance that electrification remains an option and the forthcoming Rail Review does not stall investment in the rail network.

In a six-page submission released before the Autumn Budget in October, RIA argues that the volumes of renewals work each year have fluctuated in every Control Period to date and that this poses a “serious threat” to the continuing development of the rail network. It says that a slowdown is already happening that will affect volumes of renewals until at least 2021. This in turn discourages companies from investing in developing skills and new products, reduces staff levels, reduces confidence and could put some smaller or specialist companies out of business.

After the Government cancelled electrification schemes in 2017, RIA argues wants to keep electrification on the table while it works with the rail industry to reduce costs. It says that electrification is the best solution for intensively used railways as it is better for the environment, quieter, cuts journey times and because the trains are lighter than self-powered equivalents causes less wear and tear on the track. It also, says RIA, costs less than when compared to the whole-life costs of diesel services.