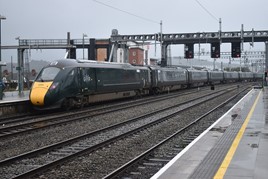 Government needs to bring electrification projects forward so that the country does not lose the skills required to deliver such schemes.

The Railway Industry Association (RIA) recommends this action in its response to the Government’s publication of a policy paper on decarbonising the UK’s transport network.

In the paper, the Government acknowledged that more electrification of the railway was likely to be necessary.

RIA Chief Executive Darren Caplan responded on March 26: “The rail industry is clear that in order to decarbonise the network by 2040 a rolling programme of electrification is required, while utilising new technologies such as hydrogen and battery on rural lines or as an intermediary solution.

“While we await Network Rail’s Traction Decarbonisation Strategy and the Government’s Transport Decarbonisation Plan, we urge the Government to bring forward electrification schemes before current projects around the UK are completed, so that the rail sector can avoid losing valuable expertise, skills and capability in delivering electrification.”

In the paper, Government stated: “We recognise that electrifying more of the railway is likely to be necessary to deliver decarbonisation."

A rolling electrification programme for the North over the next 20-plus years, has been set out by the Railway Industry Association North (RIAN).