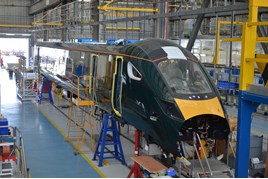 Private companies invested a total of £925 million in Britain’s rail network in 2016-17, the highest figure recorded since the Office of Rail and Road’s data series began in 2006-07. Of this figure, £767m was spent on rolling stock.

The figures, released on October 11, also show that investment in stations totalled £52m, with £105m of private investment in other areas such as information technology.

All other operators are subsidised, with Northern Rail receiving 24.7p per passenger-km and ScotRail 20.7p. The lowest subsidy figure is for c2c, which receives 0.1p per passenger-km. However, including the Government’s direct support for Network Rail, franchised train operators received 5.1p for every passenger-km travelled.

Total net government support for the rail industry in 2016-17 (excluding Network Rail loans) was £4.2 billion, with £839m spent on High Speed 2, £266m spent on other areas, and £5m from Passenger Transport Executive grants.

This was offset by a £200m contribution from the City of London Corporation and £763m of premium payments from train operating companies (the latter down by £71m compared with 2015-16).

The level of government freight grants fell to its joint lowest level since this data series began in 2007-08, with £18m worth of Modal Shift Revenue Support Scheme grants awarded in 2016-17, a £4m decrease from the previous year.

“The rail supply sector is working with Network Rail to ensure the UK railways are open for business, implementing the recommendations of the Hansford Review on contestability.

“There is a big opportunity here for suppliers to get even more involved, and we look forward to working with them in the future to continue to get more third-party investment into the sector.”